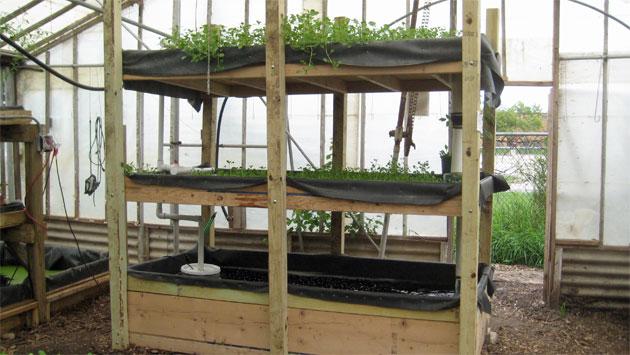 They call it aquaponics — raising fish and vegetables in a symbiotic environment combining aquaculture and hydroponics. And Evanston officials are trying to decide what to do about it.

After city staff received some inquiries from people considering opening industrial-scale aquaponics operations in town or pursuing the activity as a hobby, an Evanston city panel this week took a first look at possible rules to regulate it.

Acquaponics has all the attributes that would appear to appeal to Evanstonians who've backed community gardens and even backyard chickens — and it could become a new industry to fill some vacant warehouse space — economic development that could provide more jobs.

But this is also the Evanston that can turn out a crowd to oppose almost any new idea — like backyard chickens, for instance.

Top: An aquaponic setup in a Milwaukee greenhouse (Wikimedia image by Charlie Vinz). Above: A promotional YouTube video from Friendly Aquaponics in Hawaii.

So, like a Tilapia that might nibble on the dangling roots of a lettuce plant growing atop its pond, the Zoning Committee of the Plan Commission looked at a memo on the issue from Zoning Planner Melissa Klotz Monday night and decided to take up the question of regulation again at a meeting at 7 p.m. on Wednesday, May 16.

The memo suggests that hobby-size aquaponic ponds in residential areas are unlikely to be a cause for much concern — but suggests there might be a need to define how big an operation can get before it's no longer considered a hobby or accessory use.

And, for commercial operations, it suggests a need to differentiate aquaponics from agricultural uses not generally permitted in the city, and to determine the commercial and industrial zones in which aquaponics should be allowed.

There already is a sizable aquaponics operation in Milwaukee that has a branch on Chicago's south side.

Plan Commissioner Dave Galloway said, "If we can have chickens in back yards, why not aquaponic ponds? I think it's cool."

But the city's chief planner, Dennis Marino, suggested commercial operations might not be appropriate for business districts, and should be limited to industrial zones instead.