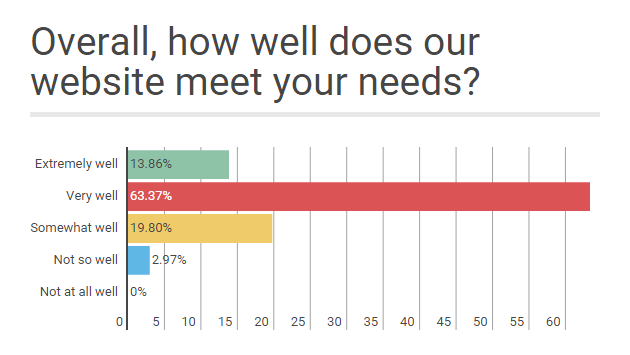 Evanston Now did an online survey of readers last week. And we're pleased to report that most of the readers who participated in the survey are generally quite happy with the site.

Seventy-seven percent of readers said Evanston Now's website meets their needs either "extremely well" or "very well." That's about 15 percentage points higher than the benchmark for the same question asked on more than a thousand other website user surveys.

We scored a bit below the benchmark, but within the margin of error for the survey, on another question asking how "visually appealing" the website is — and we'll be working to try to improve the look of the site in coming months to help raise that score.

Readers generally told us they were most interested in the types of news that Evanston Now tends to cover most — city government, public safety, business, real estate and development, followed by schools and entertainment.

Since participation in the survey was only offered to visitors to the website, we can't say what non-visitors' news preferences might be.

The survey drew responses from 101 people and has a margin of error of plus or minus 10 percentage points.