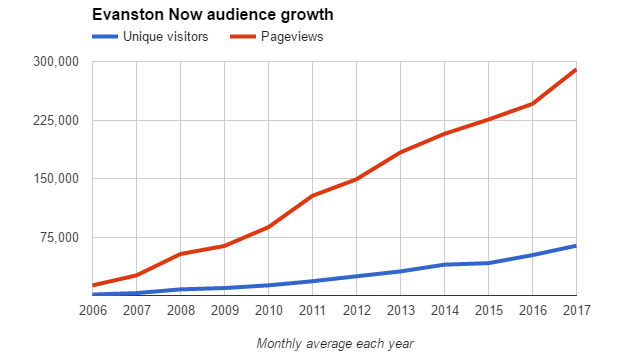 As Evanston Now nears its 11th anniversary later this month, we wanted to take a moment to thank you, our readers, for helping us set new records for both unique visitors and pageviews.

During 2016 our average monthly visitor count, as reported by Google Analytics, grew by nearly 25 percent to over 50,000 and our average pageviews per month also grew to nearly 250,000.

Both figures have continued to increase during the early months of 2017, to where we now average over 55,000 visitors and 290,000 pageviews per month.

We greatly appreciate that you’ve come to rely on Evanston Now for real news about what’s happening in your home town.

And we also much appreciate the support of our advertisers who’ve found they can effectively reach the Evanston audience on Evanston Now.

The economic environment continues to be challenging for media companies of all sizes, but we’ve been able to continue our work of delivering the news as a locally-owned, independent source — thanks to you.