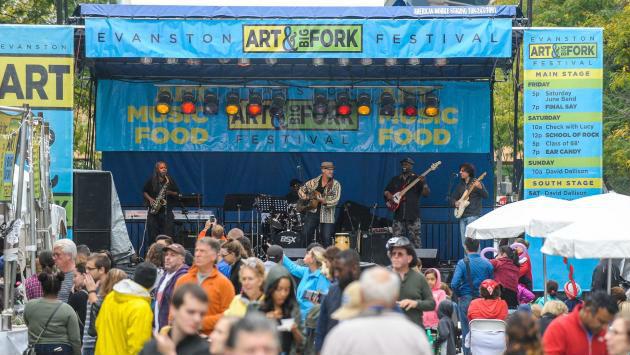 Movies for kids in the parks, rock and roll on Chicago Avenue and an art and music festival downtown. There are options outside for everyone this week:

Drop by Eggleston Park, Hartrey Avenue at Payne Street, on Tuesday to view the film Monster Trucks, part of the city’s Starlight Movies in the Park series, starting at dusk.

Stop by the School of Rock’s Parking Lot Stadium at 1308 Chicago Ave. from 5:30 to 7: 30 p.m. on Friday to listen to live music from the House Band at School of Rock Evanston. The free event is kid and pet friendly with food and beverages for sale, including pizza slices from Union Squared at 1307 Chicago.

The Evanston Art & Big Fork Festival starts at 4 p.m. Friday in downtown Evanston, on Sherman Avenue between Church and Clark Streets, with food vendors, including beer and wine, music performances and art for sale until 9 p.m. Admission is free. The festival continues on Saturday from 10 a.m. to 9 p.m. and Sunday from 10 a.m. to 5 p.m.

Baker Park, Keeney Street at Forest Avenue, is the site of A Wrinkle in Time, another Starlight Movies in the Park, starting at dusk on Saturday.

Performances of Shakespeare’s Richard III, presented by the Muse of Fire Theatre Company will continue at Ingraham Park, just behind the Morton Civic Center at 2100 Ridge Ave., on Saturday and Sunday at 3 p.m. The performances are free.