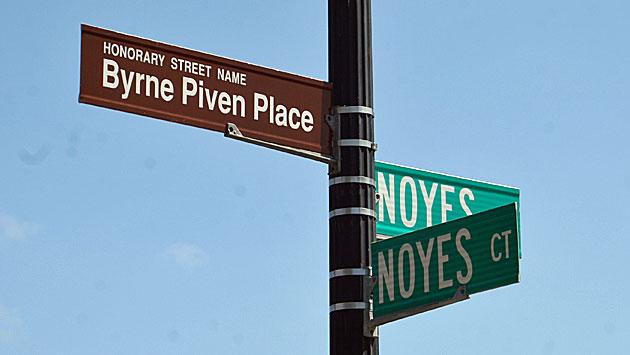 Honorary street signs are an idea members of an Evanston City Council committee seemed reluctant to expand upon this week.

At a Monday night meeting, members of the Human Services Committee said they wanted to look into the idea of putting up plaques on buildings to honor long-standing organizations in the community — rather than adding more honorary street signs.

Under the street sign program rules, the honor is supposed to be limited to living Evanston residents who've had a major cultural, historical or humanitarian impact on the city and whose work is closely associated with the proposed location of the signs.

But an exception to the "living people only" rule was made not long ago to honor the former Emerson Branch YMCA with signs near its one-time location on Emerson Street. 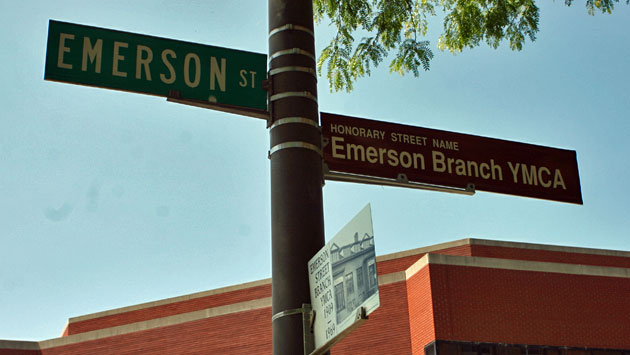 Top: A sign honoring the co-founder of the Piven Theatre near the theater's Noyes Cultural Arts Center home. Above: The Emerson YMCA sign breaks the rule that the honorary street signs are only for living individuals.

And that's prompted a flurry of requests from other organizations for their own honorary street signs.

City Parks Director Doug Gaynor told aldermen it costs about $300 to create and post a set of three honorary signs for a new honoree. Under the rules, each alderman gets to approve one honoree each year and the signs for any person honored stay up for 10 years.

In typical Evanston fashion, if you want to have somebody honored, there's a form from the Parks Recreation and Community Services Department to fill out, and, in addition to needing the endorsement of the alderman of the ward in which the signs would be posted, the application goes through a review by the Citizen's Advisory Committee on Public Place Names before being given final approval by the full City Council.

Alderman Judy Fiske, 1st Ward, said she's said "no" to two groups that asked her about getting signs — because of the rule that limits them to living individuals.

Alderman Delores Holmes, 5th Ward, said she might be OK with honoring institutions, but only for ones that had been around for 50 or 100 years.

Fiske suggested the idea of putting plaques on buildings to honor organizations, noting the one on the corner of Sherman Avenue and Clark Street that memorializes Hoos Drug Store, which long anchored that corner in a storefront that now houses a bagel shop.

And Fiske said that, given the number of long-time groups on some downtown blocks, the street sign program couldn't satisfy the demand.

And Fiske asked city staff to talk to the Preservation Commission about the idea of using plaques or other historical markers.

"That's a way of honoring an insitution forever, versus having a sign for 10 years and then take it down," Fiske said.

The committee voted to revisit the issue at its next meeting on July 2.