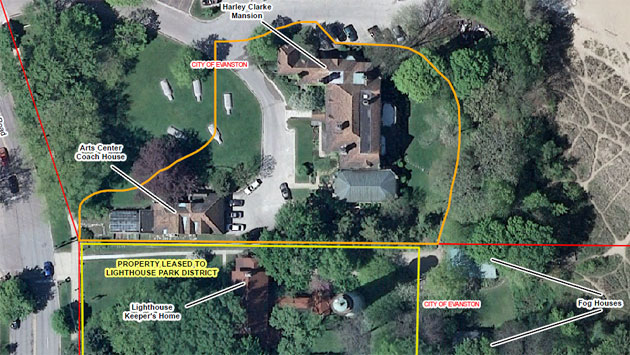 They instead instructed City Manager Wally Bobkiewicz to seek proposals for either selling just the building itself and not the surrounding land or for a long-term lease of the building.

Top: An aerial view of the mansion and its coach house, with an irregular orange line showing the approximate boundary of the parcel city staff had recommended selling.

The city has been seeking alternatives for over a year to deal with the mansion — which the city currently leases to the Evanston Arts Center.

Neither art center nor city officials believe they have the funds to pay for long-delayed maintenance work on the property.

Norah Diedrich, the art center's executive director, told the committee the group has enjoyed having the mansion as its home for over 40 years.

But she said the center's board has concluded that it can better serve the community if it's in "a more urban setting" close to the CTA and Metra lines.

"If we sell it, we'll never get this property back, it would be gone forever," Fiske added.

But Alderman Delores Holmes, 5th Ward, asked, "Who's going to pay to fix the building?"

Bobkiewicz suggested that a lease of the building was unlikely to yield sufficient up-front revenue to permit the city to help fund the relocation of the arts center.

Alderman Jane Grover, 7th Ward, raised the idea of selling only the building.

Alderman Mark Tendam, 6th Ward, said he supported that suggestion, as well the idea of just leasing the building.

"I know it confuses the issue a bit, but I'd be interested to find out what the market interest is" in those options, Tendam said.

Bobkiewicz said the city has retained a consulting firm to get a new estimate of the cost of renovating the property and would have an appraisal of its value as well that would be available for the full city council before it decides what to do next about the mansion.