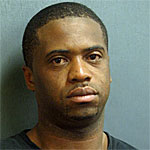 Parrott says officers recovered a 9mm handgun and a .38 caliber revolver along with small quantities of heroin and marijuana during the search.

He's scheduled to appear in Skokie district court at 9 a.m. May 1.