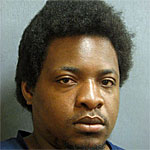 Cmdr. Jay Parrott says the woman had been shopping near Custer Avenue and Howard Street and sat down on a bench about 5:50 p.m. to put cash into her purse.

As she sat down, a man walked up, demanded the money and  grabbed it from her hands before fleeing on foot.

Detectives called to the scene broadcast a description of the robber to nearby officers, one of whom located a person matching the description in an alley in the 900 block of Howard.

Parrott says the victim positively identified the suspect as the person who'd robbed her and that he was also identified committing the crime from video surveillance.

Parrott says Pinnock told detectives he took the woman's money because he needed it to pay his cell phone bill.