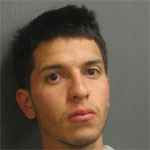 Police Cmdr. Jay Parrott says police were called about 10:30 p.m. Friday to the Citgo gas station in the 2400 block of Dempster Street, where an 18-year-old man from Palatine said he'd just been punched in the mouth and had his Blackhawk's cap stolen by one of two men who accosted him in the station's parking lot.

The victim told police that one of the men had accused him of being a member of the Latin King's street gang.

The two men fled the area on foot and police located a suspect nearby in an alley in the 1200 block of Fowler Avenue.

Police say the victim positively identified the man in custody as the man who'd punched him and taken his hat.

The suspect, Giovanni L. Renteria, 21, of the 4200 block of 11th Street in Winthrop Harbor, has been charged with one felony count of robbery.

He was scheduled to appear this morning in Skokie District Court.