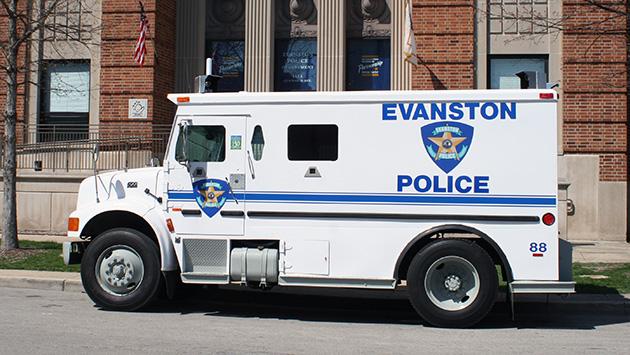 The Evanston Police Department today showed off its new "armored surveillance vehicle" — a repurposed Brinks truck equipped with the latest in camera technology.

After about $3,000 in work to repair it mechanically and give it a new paint job, and with the addition of about $12,000 in camera equipment and battery units that will let it run untended for a week to 10 days, the city has a vehicle that Police Chief Richard Eddington says "will have a huge impact on quality of life issues."

Top: The new armored surveillance vehicle. Above: One it its five roof-mounted cameras.

Eddington, who says he got the idea about three years ago after seeing a similar vehicle being shown off at a police chief's conference by Peoria police, says parking the vehicle on a street "will help people who are tired of misbehavior that disrupts the tranquility of their neighborhood."

Detective Brian Bartz, who's largely responsible for designing and equipping the vehicle for its new surveillance role, says he had it out recently on the city's west side.

After it was parked there for a couple of days, when he went to pick it up on Saturday, three different residents came out, thanked him for having it there and asked when the department would be bringing it back, Bartz said.

Cmdr. Jay Parrott says that the armored car is better than a regular squad for such surveillance activity in part because it's meant to be impressive and draw attention to itself.

"We want people to know it's there and that, 'hey, you're being recorded, so whatever you were up to, don't do it.'" Parrott said.

A monitor inside the police station showing an image from the truck's cab-mounted camera. Officers in the field can also monitor the cameras from a smart phone or similar device.

The truck also provides a higher viewing angle for the five roof-mounted cameras than would be available from a regular squad car.

It also has sixth camera mounted in the cab that has full pan, tilt and zoom capability.

Bartz says the truck records video from the cameras on board and also transmits video both using wi-fi to any nearby squad car and over the Verizon wireless network to monitoring stations at the Evanston police station.

Eddington says that with the latest camera technology the new Evanston vehicle may be the most sophisticated version of the armored-car conversion concept, which is being used in other communities including Milwaukee, Wis., and Fort Lauderdale, Fla.

The next planned enhancement for the vehicle is to add solar panels to the roof, to give it a green touch and a longer on-duty cycle before it has to be moved to recharge the batteries.