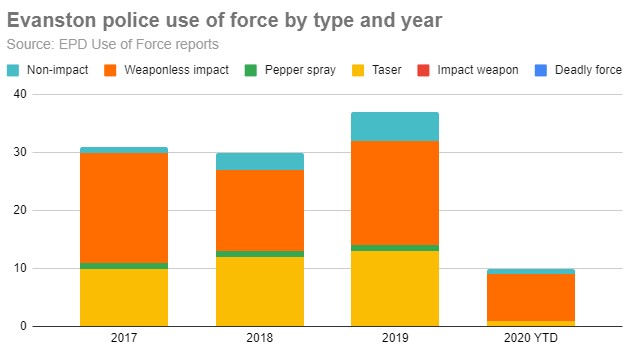 Use of force incidents reported by Evanston police have declined substantially this year after an increase last year.

The incident reports, released in response to a Freedom of Information Act request by Evanston Now, show that only 10 officers had reported using force in making an arrest in the first six months of this year.

The chart shows the most intense level of force used by each officer filing a report on an incident, ranging from non-impact means of control at the low end to deadly force at the high end.

There were no reports of the use of firearms or similar deadly force or of impact weapons, such as police batons or night sticks, by Evanston officers during the period studied.

In several incidents each year multiple officers used force in the process of arresting a single person. The number of persons reported to have been subjected to police use of force was 24 in 2017, 26 in 2018, 29 in 2019 and nine so far this year.

Averaged over the three-and-a-half year period, just over 2.5% of arrests were reported to have involved some use of force.

The use of force reports portray some harrowing incidents for officers, including a drug-crazed hotel guest who required four officers to subdue and an apparently suicidal man who escaped from psychiatric care at St. Francis Hospital and led an officer on a chase down the CTA Yellow Line tracks as a train approached.

Assessing how the frequency and severity of use of force by Evanston police compares with that of officers in other jurisdictions is difficult because no national database of use-of-force reports is available.

But a police reform group called Campaign Zero compiled use-of-force reports from 2016-2018 for the 100 largest cities in California.

Some cities that scored very well in that study, for making relatively limited use of force, like Santa Barbara, appear to be doing somewhat better than Evanston.

Looking only at use of less-lethal weapons — such as batons, strangleholds and tasers — Santa Barbara police were reported to use such force at a rate of 4.1 incidents per 10,000 population over the three year span of the study.

Comparable numbers for Evanston would show, for the period 2017-2019, a use of less-lethal weapons at a rate of 4.9 incidents per 10,000 population over the three years.