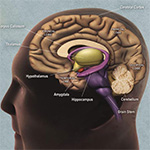 A new study claims Evanston is the 4th brainiest city in America — edging out Cambridge, Mass.

The report, published in The Atlantic Cities, cites research from Luminosity, which bills itself as an online brain performance training program used by 2.4 million people.

All the top 10 places were college towns, with Stanford University in California coming in at the top of the list.

The report, by Richard Florida, notes that users of the Luminosity program likely skew toward more highly educated and affluent individuals.

Lumosity data scientist Daniel Sternberg said, "College towns tend to do well because education is correlated with cognitive performance. We've seen in our other research that those with advanced degrees tend to perform better cognitively throughout the lifespan."

The report says cognitive performance as measured by Lumosity is closely associated with several key dimensions of an area's level of innovation, skill and economic performance.