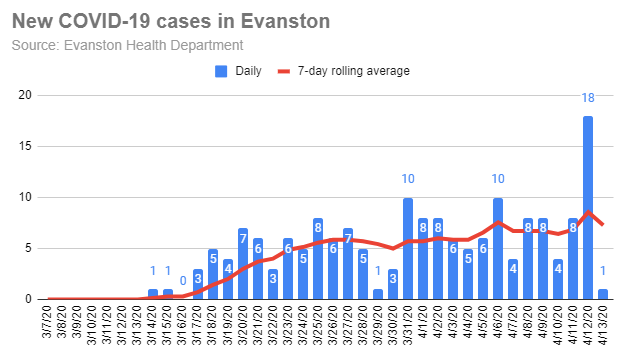 Evanston today reported just one new COVID-19 case today — its smallest increase in just over two weeks. The increase, to 175 total cases, followed its worst day ever for new cases on Sunday.

The state reported 74 more deaths for a total of 794. Forty-one of those deaths occurred in Chicago, where the death count now stands at 308. Evanston reported no new COVID-19 deaths today. Its total remains at five.

The number of COVID-19 tests conducted across Illinois fell back today from the nearly 8,000 reported on Sunday to just over 5,000 today.

Gov. J.B. Pritzker has set a goal of conducting at least 10,000 tests daily to get a better count of how many Illinoisans have come down with the novel coronavirus — a goal that remains elusive, despite a gradual increase in testing capability.

Examining the red line on those charts suggests that Evanston may be closer to having its case count level off than the state as a whole is.

Gov. Pritzker, at his news conference this afternoon was praised by representatives from statewide organizations of nurses and firefighters for a decision by the sate workers’ compensation commission today to create a rebuttable presumption that any worker in a specified list of essential occupations who fell ill with COVID-19 acquired the disease on the job and therefore would be eligible for workers’ compensation benefits.

Some employer groups have criticized that decision for shifting costs onto employers at a time when they’re straining to pay their bills, but the governor said that in the midst of an emergency the state needed to protect people as best it can.

“Someone has to pickup  the tab,” Pritzker said, “and sometimes that has to fall on the people who have the most resources.”

In response to several questions, the governor said he still hasn’t decided whether to lift the stay-at-home order at the end of the month or permit the reopening of schools then.

But he suggested that any return to near-normal is likely to be very gradual and handled on an industry-by-industry basis as safe working conditions can be determined for different types of businesses.