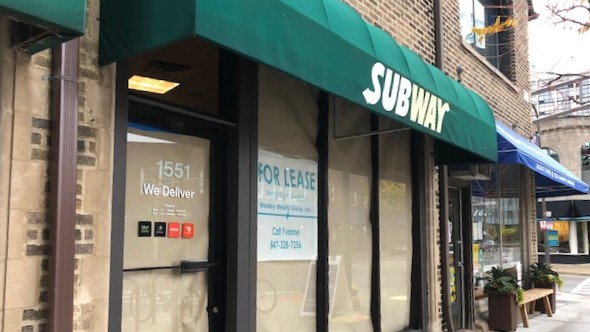 If Subway can’t make it, you know things are bad. The chain sandwich shop on Sherman Avenue closed recently, leaving yet another “For Lease” sign on a local business.

A restaurant supported by national advertising, selling mostly takeout as opposed to dine-in, and still it closed.

The Sherman Avenue Subway shut its doors even before Gov. J.B. Pritzker this week ordered new restrictions on bars and restaurants in Suburban Cook County.

Region 10 has seen significant increases in COVID-19 positivity rates and hospitalizations for COVID-like symptoms in the past week or so. The governor hopes the restrictions will help reduce the spread of the illness, and then allow indoor service again.

The City of Evanston’s positivity rate has been far lower than most of Region 10 since the pandemic began in March. But when Pritzker stopped indoor service in some nearby counties, Derek Gaspar says it was a “wakeup call.”

Gaspar owns the Lucky Platter restaurant on Main Street. When Gaspar saw new restrictions imposed in DuPage, Kane, Will and Kankakee counties last week, he thought, “This is going to happen to us.” He was right.

This is the second time restaurants and bars have had to stop indoor services. The first was when the pandemic began, and lasted until things started to be get better by late June.

However, Gaspar did not add indoor dining until mid-September. He concentrated on take-out, delivery and a new outdoor patio. But when the weather started getting colder, he opened up indoors, under restricted capacity mandated by the state. Pre-pandemic he could serve 85 customers indoors. More recently, around 20.

Also down, the number of employees, from 30 to a dozen. And with indoor service going away, those dozen employees will be getting fewer hours.

Gaspar spent money on plexiglass shields, to increase indoor safety. But now, those shields will sit, for who knows how long. Evanston is “so caring,” he says, hoping local residents will continue support with takeout and delivery.

Like the Lucky Platter, the Farmhouse restaurant downtown has had “pretty strong” takeout and delivery orders, says General Manager Phil Coco. Farmhouse has a catering business which delivers to homes as far away as Glenview. Coco says some people had “no problem” with socially distanced seating inside, but others “just will not come in” for now.

And now, nobody can come in, other than to pick up. “I hope to God takeout can support us,” he says. Coco is planning to have takeout and delivery Thanksgiving dinners.

“Nobody knows” how long the new restrictions will last, he says. “We’ll just have to let it play out.”