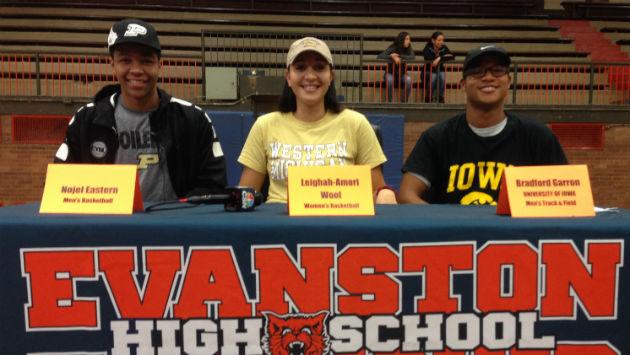 Three of the most accomplished athletes in Evanston’s storied history put their names on the dotted line Wednesday afternoon.

Basketball standouts Nojel Eastern and Leighah-Amori  Wool and track star Brad Garron all signed letters of intent to pursue their dreams on the collegiate level on the first official NCAA signing day on the calendar at a ceremony held at Beardsley Gymnasium.

Eastern plans to play at Purdue University, continuing a journey during which he was one of the nation’s most sought-after cage recruits, while Wool (Western Michigan University) and Garron (University of Iowa) also made their decisions final in front of an appreciative and supportive audience of classmates, school administrators and family members.

The Wildkit trio all have a full season left in their athletic careers and have already established individual legacies that will be hard to match in the future. Wool rates as the all-time leading scorer in the history of the girls basketball program, Garron owns the school record in the 400-meter dash, and Eastern is on pace to be a part of more cage victories than any other player in ETHS history.

Eastern, who has scored 955 career points entering his fourth season on the varsity, was recruited by every single Big 10 Conference school and made official visits to Michigan State, Ohio State, Purdue, Seton Hall and DePaul before deciding on the Boilermaker black and gold.

The persistence of Purdue coach Matt Painter and his coaching staff, along with the opportunity to play significant minutes as a freshman, helped sway the 6-foot-6 Eastern.

“They were always there to support me, even when I was hurt,” Eastern pointed out. “I felt confident in my heart and soul that this was the right choice, and it feels great! It just felt like I built a bond with the players who are already there, and I really hit it off with them.

“They felt they needed another point guard. I can come in and help them be the best program that they can be, and they’ll help me. It’s a great opportunity for me to come in and play right away, and now I can just focus on my senior year in high school, winning a state title at Evanston and going out with a bang!”

“It seems like just last week Nojel was a freshman. I knew he was special the first time he walked through the door for varsity tryouts, and it just went so quick,” said ETHS coach Mike Ellis. “We’re blessed to have a guy like Nojel to represent this high school and this community. And with his size and his vision on the court, he’ll be a good point guard or combo guard at Purdue. There won’t be a period of adjustment for him. His skills will allow him to get on the floor, to create and to make plays for them right away.

“Nojel is one of the best character guys I’ve ever had the opportunity to coach. I think he has the potential to play in the NBA some day.”

Wool’s versatility and value as a scorer, rebounder and ballhandler places her near the top of the short list of the great female players to wear the Kit uniform along with former standouts like Erica Handelman, Schenita Stewart, Pollyanna Johns and Penny Armstrong.

She chose Western Michigan over Loyola University and Bradley University.

“It’s been a really long process for me,” said Wool. “It’s actually a huge relief for me now that it’s done. I just feel like I fit in well with their team (at Western Michigan), and I watched them play and I liked the feel for what they do. They came in kinda late in the process for me, but I really liked all the girls there and I really wasn’t content with some of the other offers I had.

“Their No. 4 (forward) player just got hurt, too, so they have a spot for someone like me there. I know I still have a lot of work to do. I have to work on staying in shape, on my shooting, on getting quicker and better ballhandling, too.”

Wool is a two-time all-Central Suburban League South division selection who has been a starter all four years in the program. She also owns the school mark for 3-point field goals.

Garron picked the Hawkeyes following a junior year in which he broke the school record in the 400-meter dash in back-to-back meets last spring. He set the Evanston mark of 47.90 seconds at the Loyola Academy Sectional meet, then lowered it to 47.72 at the Illinois High School Association state semifinals before earning an 8th place finish overall at State.

He also opened eyes with his performance at the Junior Nationals this past summer, placing 4th in the 400 and 10th in the 200 in his age group.
Veteran Evanston head coach Don Michelin says the sprinter is a threat to win multiple state titles in those events next spring.

“Now is really his time, because he’s grown into a Division I body,” said Michelin. “He went Downstate for us in all 3 relays as a freshman and the next year he was the guy who was the difference maker in all 3 of those relays when we were 2nd in State. Now it’s time for his maturing body and his great character to come together. What separates the good guys from champions is the character they show if they want to be the man, and this year it will be his team.”

Garron knows from talking with the Iowa coaching staff that his future might also include competing in the 100-meter dash, an event where he’s been plagued by slow start during his high school career.

“I’ll look at running all of the sprints there, because they all train with an aggressive base and everyone trains for every distance,” he said. “I have a lot of hope and a lot of excitement about the (high school) season.  I agree with coach — I can win State in both those races — but I’m not necessarily worried about the places I get at State. If I get the times, everything else will work out.”