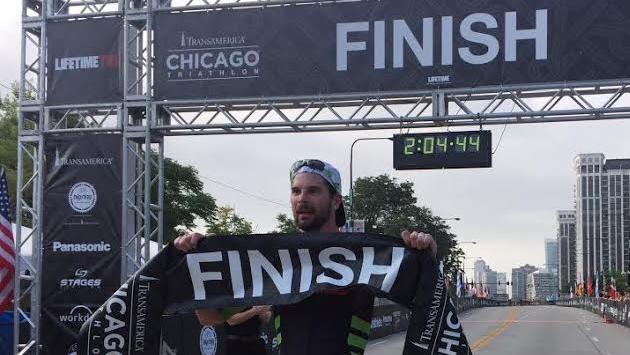 For the second year in a row, a teacher from Evanston took first place in the international race of the Transamerica Chicago Triathlon, which was held Sunday.

Not only that, but Jeremy Rielley, who teaches physical education at Dawes and Orrington elementary schools and also serves as a soccer coach at Evanston Township High School, shaved a few seconds off his finish time of 2:00:57 last year. This year his finish time was 2:00:39.

Rielley won several other races this summer and also placed second overall in the Ironman 70.3 Steelhead competition in Benton Harbor, Mich. on Aug. 14. His performance there qualifies him for participation in the 2017 Ironman 70.3 World Championship next year in Chattanooga, Tenn.

At the District 65 Board meeting Monday night, Superintendent Paul Goren lauded Rielley as “not only a fabulous athlete, but a fabulous teacher. “   Goren  concluded: “He’s our own Michael Phelps.”

Rielley returned the compliment:  “I would not want to work or coach in another place on Earth,” he said.