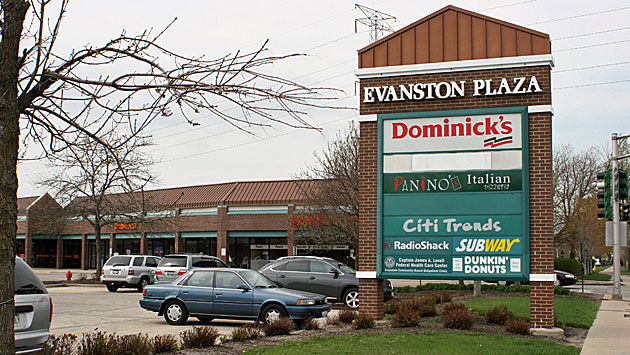 Evanston aldermen will hold a public hearing tonight on plans to set up a tax-increment financing district to bolster the half-empty Evanston Plaza shopping center at Dempster Street and Dodge Avenue.

The proposal could lead to spending as much as $20 million on improvements to the center over the 23-year life of the tax district.

The plan was approved last month at a meeting of the Joint Review Board, which represents the other local taxing bodies that would see their property tax revenue from the plaza frozen during the life of the TIF.

A report prepared by a city consultant describes the shopping center as a "blighted area" that has seen the value of its property decline over the last five years, while city-wide values have increased.

It says the buildings are in some ways obsolete — with vacant large store spaces only likely to be filled with smaller tenants that would require reconfiguring the space.

And it says aspects of the layout of the property are unsatisfactory — including problematic auto acces and minimal buffering from residential uses.

And it says that utility service to the plaza area is "antiquidated and obsolete."

The council won't vote on the TIF plan tonight, but could vote on it as early as its May 29 meeting.

City may spend $20 million on Dempster-Dodge

The information packet for the public hearing