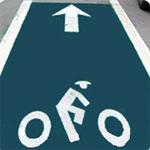 Evanston aldermen tonight are expected to approve seeking more than $1.3 million in state grants to create a protected bike lane on Davis Street and rebuild the bike and pedestrian trail through the Ladd Arboretum.

The vote will come just two weeks after the City Council approved plans to build a protected bike lane on Church Street this year.

The Davis Street protected bike lane would provide a westbound companion to the eastbound lane planned for Church Street.

The Davis Street project funding request asks for $776,000 from the state, which would have to be matched with $194,000 in city funds.

It would construct the bike lane from Judson Avenue to Dodge Avenue, and then, after a break for the Evanston Township High School campus, the lane would resume from Pitner Avenue to the North Shore Channel.

The project would also provide for streetscape improvements on Davis in the portion of downtown from Ridge to Benson.

The $2.3 million Church Street project is being paid for from a combination of tax increment financing district and city capital improvement funds.

The Ladd Arboretum project seeks $580,000 from the state, which would be matched with $145,000 in city capital improvement funds.

It calls for rebuilding the trails through the arboretum which city officials say have had little work done on them since the were first constructed in the early 1960s.

In a memo to the aldermen, Parks Director Doug Gaynor says poor drainage conditions along the trails now make them frequently unusable in inclement weather.

The trails are used by students walking to and from Haven and Kingsley schools, who, Gaynor says, are often forced in bad weather to walk on McCormick Boulevard, which has no sidewalks, because of the poor condition of the trails.