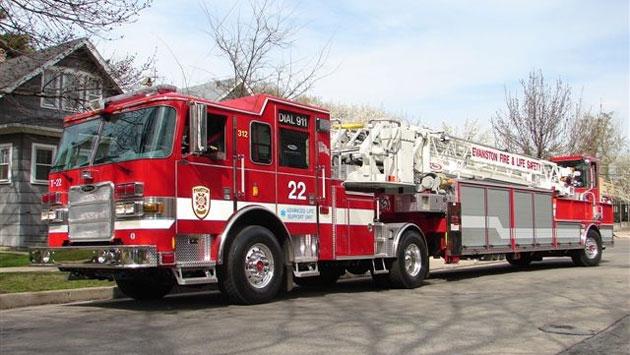 Evanston aldermen tonight are scheduled to approve spending just over $1 million to purchase a new aerial ladder truck for the city's Fire Department.

The new rear-tiller steered Pierce truck, equipped with a 100-foot aerial ladder, would replace a similar 23-year-old model that officials say is in poor condition.

Three years ago the city replaced its other aerial ladder truck, a 1990 model, with a new one for $958,000. That purchase was largely funded by a $600,000 federal homeland security grant.

The city has failed to qualify for a similar grant for the new truck, and so it plans to fund the purchase of the new vehicle — which has a projected 20-year life cycle — through general obligation bonds issued this year.

The articulated tiller design of the truck is designed to provide a tighter turning radius to more easily maneuver Evanston's narrow streets.

At the Administration and Public Works Committee meeting, Alderman Ann Rainey, 8th Ward, suggested the city "should go out begging, or shaming" not-for-profit, property-tax-exempt organizations in the city to help pay for the purchase of fire department vehicles.

Fire Chief Greg Klaiber said the old ladder truck, now 23 years old, will be sold for scrap once the new one is placed in service.