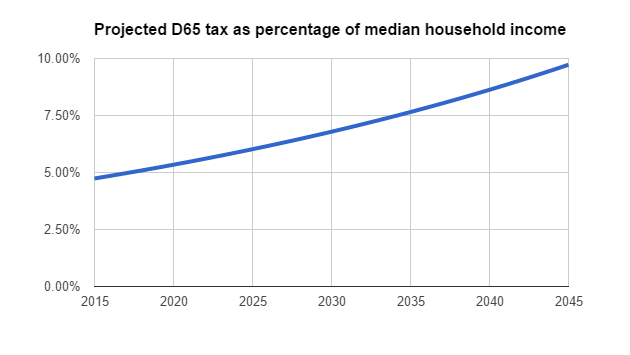 Evanston voters Tuesday decided to head down a road that, unless they turn back, leads inevitably to fiscal disaster.

They gave the District 65 school board carte blanche to increase spending at an annual rate of 3.9 percent — the rate the administration says it needs to avoid making cuts — in an era when the average household income of Evanstonians has been rising less than half as fast.

The chart above shows where this road leads — to a doubling of the school tax burden in just under 30 years.

Here’s how you get there.

The median value of an owner-occupied dwelling unit in Evanston in 2015, the Census Bureau says, was $348,600. Assuming the tax assessor agreed that our median homeowner’s house had that value, the homeowner would have paid, after her homeowner’s exemption, $3,318.41 in property taxes to support the District 65 schools.

So, the school tax would have amounted to 4.74 percent of the household’s income.

Let the school board continue increasing its spending by 3.9 percent on into the future, and if incomes increase at the same pace in the future that they have over the past 15 years, our average homeowner’s District 65 tax bill will consume 9.73 percent of her income in 2045.

And remember, our median income household with the median value owner-occupied housing unit pays a total of $8,751 in property taxes to all units of government now. Let the rest of them decide to behave like District 65 and — if voters permit it — our average homeowner’s total property tax bill will consume nearly 26 percent of her household income in 2045.

Fortunately, the 16.7 percent tax hike voters gave District 65 Tuesday will only get the board about six years down this road to disaster before they have come back and ask the taxpayers for even more.

We’ll see whether the voters decide then that it’s time to turn back.