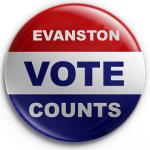 With returns in from all 53 precincts, the yes vote was 4,776 to 2,738 no votes. That's a 63.56 percent vote for having the City of Evanston take over the township's responsibilities.

The voter turnout in Evanston for the referendum was low — just 18.79 percent of registered voters.

In the three races for judge in the 9th subcircuit, with 254 of 256 precincts reporting:

All these judicial contests were in the Democratic primary. The Republican Party didn't field candidates in those races.