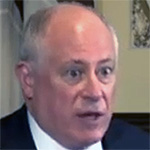 Gov. Pat Quinn is scheduled to appear at a news conference in Evanston this morning to announce a $1 million Illinois Gigabit Communities Challenge grant to the city and Northwestern University.

The program, which has already awarded grants for some south-side neighborhoods in Chicago and to the City of Aurora, is designed to stimulate broader deployment of ultra-high speed internet connections across the state. A gigabit connection would be roughly 100 times faster than the typical broadband internet connection now commonly available.

The grant award to Evanston is intended to focus on the Chicago Avenue corridor, and the announcement is to be made at 10:30 a.m. at the new library branch at 900 Chicago Ave. at Main Street.

The city has proposed creating a tax increment financing district to spur development in the Chicago-Main commercial district — including an office building proposed for the southeast corner of the intersection, which presumably would be more attractive to potential tenants with the availability of the gigabit internet connection.

Evanston was one of over 40 communities that applied for the grant program.

The program is expected to make use of existing fiber optic cable conduits owned by the university and the city will provide access to public rights-of-way for the cable without imposing its usual easement charges.