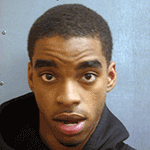 A 17-year-old Evanston youth has been charged with robbing a couple near St. Francis Hospital earlier this month.

A married couple walking back to their Rogers Park home from the hospital were robbed of a backpack during the holdup about 8:50 p.m. Feb. 14 near the intersection of Mulford Street and Sherman Ave.

The backpack has not been recovered.

Police says Deshawn Gillette. of 119 Clyde Ave. was identified in a line-up by both victim and a charge of armed robbery was approved over the weekend by the felony review unit of the Cook County State’s Attorney’s Office.

Gillette is being charged as an adult as required by state statute for the armed robbery offense. He appeared at bond court today and was given a $350,000 D bond.

He's next scheduled to appear in Skokie district court at 1:30 p.m. on March 12.