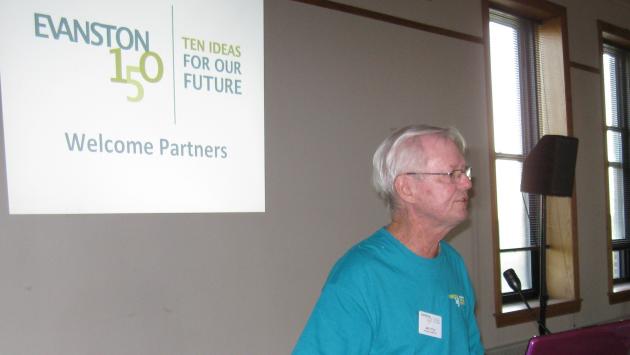 Like newly planted seeds in a spring garden, the 10 “visionary ideas” of a citizens group for celebrating the 150th anniversary of the founding of Evanston are beginning to show signs of life.

The 10 ideas were announced Nov. 10 at an event at the Levy Center. Thursday night, the groups gathered in the Parasol Room of the Morton Civic Center to report on their progress.

Most groups have been meeting on a regular basis, at least monthly, and have broken their big ideas down into smaller segments, with sub-committees exploring various options.

Others have brought several existing community groups together to coordinate their efforts.

Nevertheless, some movement was reported on all 10 fronts. The objective is to have most of the projects well established by Dec. 29, 2013, the official date of the anniversary.

The group called “Water, Water Everywhere” will be rolling out a pilot project during the 2012-2013 school year to provide swimming lessons for second-graders at three Evanston elementary schools—at Oakton, Washington, and Dawes—as part of its goal to “teach all Evanston children to swim.”

Working with the Evanston/Skokie District 65 school administration, the group completed a survey of current first-grade students and found that, on a four-point scale, 23 percent have no swimming skills at all, 30 percent have some skills, 36 percent are moderate swimmers, and 17 percent are considered good swimmers.

Taking advantage of early-release days, when students have the afternoons off because of teachers meetings the first Wednesday of each month, second-graders at the three schools will have the option to be transported to one of three swimming pools in the city…at the YMCA, the YWCA, and Evanston Township High School…and be taught to swim by volunteers, including high school and Northwestern students.

To ensure proper supervision, the group plans to have one volunteer instructor for every five kids. The lessons will be free, including transportation, and the total cost of the program will be $4,000, according to Pam James, who made the report. She said the funds for the project will come from donations.

The group has abandoned plans for a water park and for free access to Evanston’s beaches, which was part of their original idea.

The 10 idea groups were told by former Evanston Mayor James Lytle, a member of the Evanston150 Steering Committee, that such modifications are to be expected, based upon the experience of a similar group in Dubuque, Iowa. 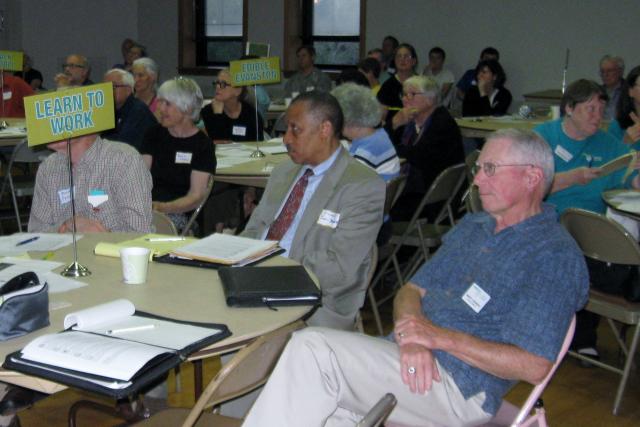 Top: Former Mayor Lytle offers guidance for leaders of the 10 idea groups. Above: Each idea was assigned a table for participants to network with each other.

Other signs of progress reported at the Thursday night gathering:

The More You Know.  This group, charged with establishing fully functional neighborhood literacy centers throughout Evanston, envisions community spaces outside of the library system that would be equipped with computers, an “iPad Bar,” wifi, and have the resources of a knowledgeable staff. The group is currently developing a directory of free wifi hot spots in the community, of which there is a growing number.

Here’s To Your Health. Currently the group  is researching community health centers elwsewhere that could be replicated in Evanston.

Edible Evanston. This group has adopted the acronym GREEN, to stand for Growing, Restoration, Education, Extension of the growing season, and Natural composting, as its guidelines. A number of organizations in Evanston are working on various aspects of this group’s charge, and it is hoping to coordinate their efforts.

Walk ‘N Roll. This group is collaborating with Edible Evanston to develop an abandoned railroad right-of-way, known as the Mayfair Cutoff, into a trail that would eventually link the present North Shore Channel Path and the Mayfair Cutoff into a multi-mile, looping bicycle/walking path enriched with edible planting, community gardens, and people places.

This group is also exploring the idea of adopting what is known as an “open streets project,” whereby streets are temporarily closed to traffic to provide opportunities for walking, biking, shopping, and the like. The group also hopes to organize an annual car-free event for Evanston, to encourage biking, walking, and public transit use instead of driving by car.

Green  and Clean. This is another area where the Evanston150 group hopes to coordinate efforts of others, including consolidating web sites to a simple access point for all.

Teen Town. This group hopes to develop a teen center for the youngsters in the community that will be safe and fun. Several teens are members of this group, and one reported that they hope to get a new name, as Teen Town doesn’t go over well with the teens, they said.

Learn to Work and Work to Learn. This group has been meeting regularly to consider work force development projects for Evanston with a particular focus on providing job training and opportunities for young people who are not on the traditional college track.

Market for All Seasons. This group is exploring the possibility of finding a location for a year-round market for produce as well as artisan projects.   Part of their effort to date has been to research similar projects in other parts of the country.

Little and Learning. The goal of this group is to widen the opportunities for preschool experiences for 3- and 4-year-olds. One project being considered is an annual pre-school fair. 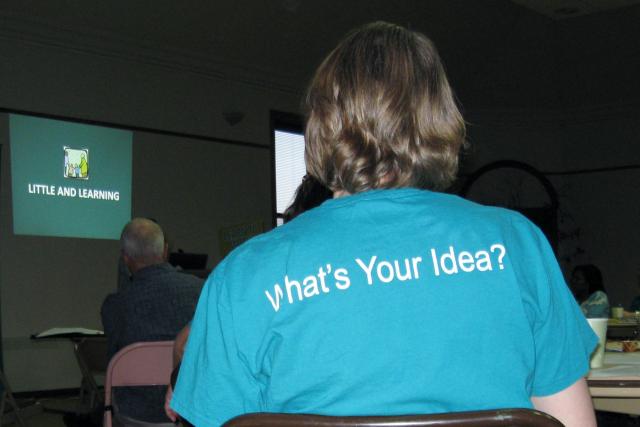 Wearing an Evanston150 T-shirt, this participant listens to the early-childhood presentation.

Another group, dubbed unofficially as “The 11th Idea,” is in the planning stages now with the objective of branding as many community events and activities as possible to take place during the 2013 anniversary year. This group is eagerly looking for volunteers to help plan and coordinate the events.

Evanston150 has established a website to contain updated information on activities of the 10 idea groups, most of which also have Facebook pages that encourage constant communications among members and others.