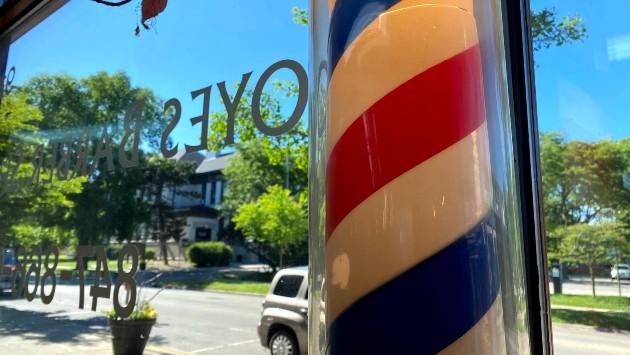 Manny Booge says it usually takes about a month to fill up one of Noyes Barber Shop’s 25-gallon trash cans with hair swept up from clients.

But the shop topped one off just in the two weeks since it reopened.

That’s both because people’s hair is longer than usual after months of quarantine, Booge says, and because he’s booked solid as regulars flock back in.

iKandi Hair Studio is just as packed, and owner Kandi Corbbins is glad that most customers are ready to come back to the salon.

“The fact that I don’t have an appointment available for three weeks is a blessing,” Corbbins said.

The long waits are partially the result of the new requirement to space customers out, meaning fewer slots are available. But they also reflect Evanston residents’ excitement at the prospect of getting a trim, shampoo or styling after weeks of quarantine to minimize exposure to COVID-19.

Illinois allowed personal care services like salons and barber shops to reopen when it moved into phase three of the Restore Illinois framework on May 29. State recommendations were revised constantly as the day approached.

That meant having to keep up with the latest guidelines, Steven Papageorge Hair Salon manager Ellie Papageorge said, and ensure that all of the salon’s stylists and staff members would be on the same page once appointments started again.

“Instead of opening on our first day, we took it to walk everybody through what we had to do and I think that really helped to solidify everybody knowing the exact protocol and things like that,” Papageorge said. “Everybody was really well prepared.”

Since then, businesses have begun adapting their treatments to conform to safety requirements, and they’ve been continually learning as their reopenings have unfolded.

Chairs turned to the wall to help maintain social distancing.

The shops have been working to keep customers up to speed with their new procedures to make appointments as smooth as possible. Papageorge sent customers a long email with the salon’s safety procedures.

“It was very extensive,” she said. “Some called it a novel.”

But by and large, customers have been impressed with the extent to which the shops have adjusted. Papageorge said clients have told her they feel safer at the salon than at COVID-19 testing centers.

“Our Google reviews comment on how ultra-clean the place is,” Booge said.

Customers’ experiences will be different before they even enter a barber shop or salon. Since the state caps businesses’ occupancy limits at five customers per 1,000 square feet, or 50 percent of store capacity, clients are now asked to wait outside or in their cars until they’re called.

For some treatments, the occupancy limit poses a particular challenge. Salons are used to “stacking” — letting one client’s new hair color process, for example, while tending to another client at the same time. That’s not always possible anymore.

“We’re not able to stack all the time because if everyone is stacking at one time, that means there’s going to be too many people in the salon,” Corbbins said. “We do dreadlocks, and for lock maintenance, it’s about 45 minutes from shampoo to chair, then they go into the dryer for an hour. Well, that’s a whole hour of time that you’re just sitting there and you’re not able to work on somebody else. So scheduling is the biggest nightmare that we’re having.”

Just the experience of being inside a shop is different. Booge no longer places newspapers and magazines in the waiting area, and Corbbins has had to remove iKandi’s snack bar.

“We’re known for having the best snacks during your service time,” she said. “We closed the snack area and that’s, you know, not great.”

When clients enter Steven Papageorge, their temperature is taken and they head to a shampoo bowl. Every other bowl is in use, Papageorge said, to keep everyone six feet apart.

The cleaning procedures have become stricter. Stations, chairs and tools are washed and disinfected after every customer, and stylists have to wait ten minutes to use a station in order to let the disinfectants work.

Noyes Barber Shop rotates through two sets of tools, Booge said, so the set not in use can be cleaned completely. Its clippers are cleaned with 70 percent alcohol, while the brushes and combs are disinfected with barbicide.

Owners have had to work around the issue that cleaning staples like rubbing alcohol and hand sanitizer have become harder to find.

“You can’t just walk into Jewel and get them,” Booge said. “We’ve had to order in bulk.”

“We all were scouring stores on the Internet in order to try and order together, and that worked out successfully for us,” she said.

Everyone is required to wear a mask, which complicates some treatments because the straps can get in the way. Booge has customers take their straps off and hold the mask over their nose and mouth.

Papageorge said that stylists can work with masks that go behind the ear, in contrast to those that wrap all the way around the head.

“There’s a few things we can do to take the part that goes behind the ear and clasp it behind the neck with a tool that we would use for updos,” she said. “There’s little tricks that people have been posting for hairdressers on Instagram.”

But the masks have created difficulties for both staff and customers.

“The stylists are seemingly more tired because their airflow is being a little bit restricted,” Corbbins said. “It’s also been an issue for some clients who have breathing issues. We do braiding — sitting in the salon in a mask for four hours has been hard on these people.”

The businesses are changing their workflows in other ways. iKandi placed sneeze guards and shower curtains between shampoo bowls, dryers and stations.

Despite the hurdles of adapting to keep everyone safe, though, Corbbins said it hasn’t been entirely new because stylists and barbers are already used to disinfecting and keeping strict sanitary rules.

And even if customers are wearing longer coifs than usual, the quarantine’s disruption to people’s routines has also inspired some new hairstyle experimentation.

“We’ve actually noticed some people — there’s been a few who just want it all cut off — but now they’ve had an opportunity that they wouldn’t have had before, meaning they had all this time to let it grow,” Papageorge said. “And now they’re able to do something different with it, like the infamous Bradley Cooper hairstyle.”

Whether the goal is the Cooper look or a return to normalcy, Evanston’s cutteries are again open to make it happen.