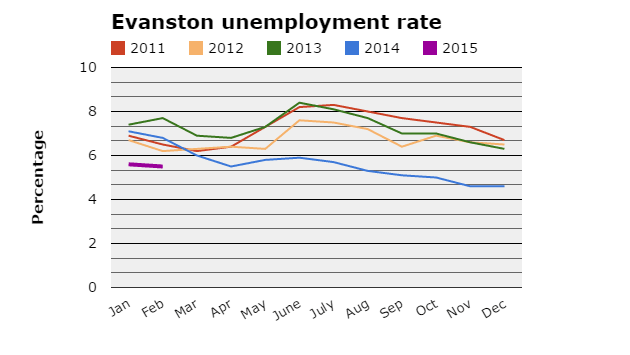 The jobless rate in Evanston declined a bit last month, but the drop was smaller than the decline in the metro area jobless rate.

Evanston's rate hit 5.5 percent last month, down just a tenth of a percent from January, but down 1.7 percentage points from a year ago.

Of the just over 100 communities in Illinois with more thn 25,000 residents, 32 had lower unemployment rates than Evanston in February. The lowest jobless rate in the state, 4.1 percent, was found in Highland Park. Wilmette's rate was 4.7 percent, and the rate in Arlington Heights and Glenview stood at 4.8 percent.

At the other extreme, the jobless rate was 12.4 percent in Harvey, 11.5 percent in Chicago Heights and 10.6 percent in Round Lake Beach.