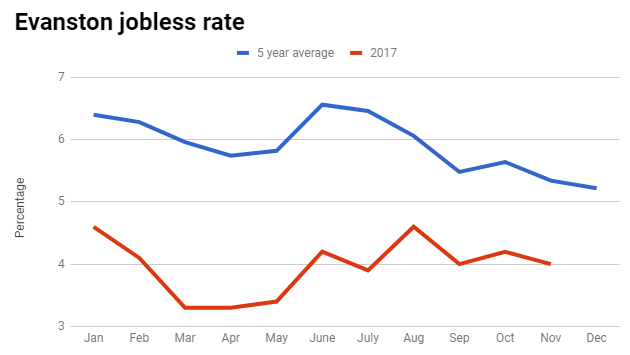 Evanston’s jobless rate fell to 4.0 percent last month, staying more than a full percentage point below the average of the last five years and down a half a point from a year ago

Figures released by the Illinois Department of Employment Security show that the jobless rate for the Chicago metro area has remained unchanged at 4.7 percent for the past three months.

Evanston’s labor force grew by 195 people last month as the number of jobless workers declined by 64 and the number of people with jobs increased by 259 to a total of 37,994, the highest level since July.

Statewide, the jobless rate was unchanged last month at 5.7 percent, but down from 5.2 percent a year earlier. These jobless figures are not seasonally adjusted.

Thirty-two of the 107 Illinois communities with more than 25,000 residents had jobless rates lower than Evanston’s in November. That was down from 46 in October.

The highest jobless rate in November was in Harvey at 9.4 percent, followed by 8.7 percent in East St. Louis and 8.5 percent in Dolton.

Skokie last month was tied with Evanston at 4.0 percent.