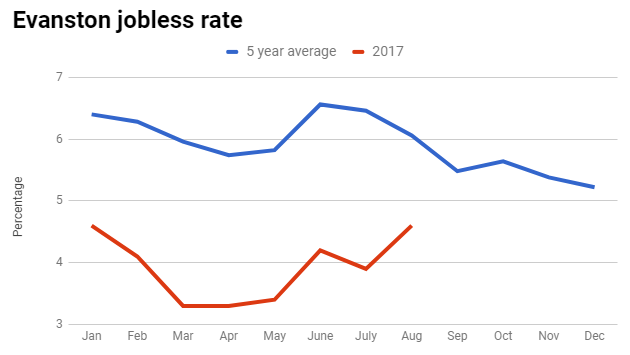 Evanston’s jobless rate rose sharply last month to 4.6 percent from 3.9 percent in July. The jobless roles increased by 245 people and 330 more withdrew from the labor force.

The figures released this noon by the Illinois Department of Employment Security continue a decline in the size of the workforce that started last month.

But Evanston’s jobless rate remains below its five-year average for August of 6.1 percent and lower than its 4.9 percent level last August.

The jobless rate for the Chicago metro area also increased to 5.3 percent in August from 4.7 percent in July, still down from 5.8 percent a year ago.

The statewide jobless rate rose from 4.9 to 5.2 percent, though that was down from the level of 5.8 percent a year ago.

Forty-four of the 107 Illinois communities with more than 25,000 residents had jobless rates lower than Evanston’s in July. That was up from 23 in July.

The state’s lowest jobless rate last month was 3.5 percent in Vernon Hills. Highland Park was at 3.6 percent and Wheeling at 3.7 percent.

The highest jobless rate was 11.2 percent in Harvey, followed by 10 percent in Dolton and 9.5 percent in Maywood.

Skokie’s rate last month was just above Evanston’s at 4.7 percent. Wilmette was at 3.9 percent.