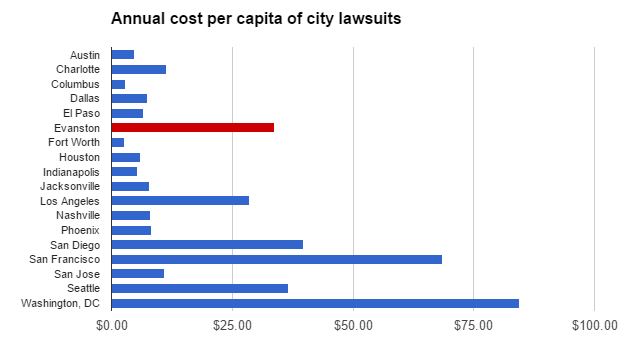 Legal costs for Evanston's city government in recent years on a per capita basis have been running roughly 70 percent above the average shown in a nationwide analysis of much larger communities.

Governing magazine sought figures for lawsuit payouts, tort insurance costs and the cost of in-house and outside attorneys from the nation's 25 largest cities and was able to assemble complete data for recent three-year periods for 17 of them.

When the annual average cost for each of those communities is divided by the population of each town, it works out to an average of $20.02 per resident per year.

By comparison, data assembled by Evanston Now from city budget documents shows Evanston has averaged spending of nearly $34 per resident for those costs in recent years.

Muncipalities can face lawsuits for a wide range of issues — from allegedly defective playground equipment to claims of police brutality.

And the likelihood of being sued can vary depending on the receptiveness of local juries to plaintiffs' claims as well as whether cities have acted to reduce their legal exposure by properly maintaining facilities and training employees.

Evanston Corporation Counsel Grant Farrar, in a budget memo to aldermen, argues that the city's switch when he was hired in 2009 from a practice of settling most suits to aggressively litigating them, mostly with in-house counsel, has reduced the city's legal costs.

But the memo doesn't provide comparative cost figures for years before the policy change.

He said more complete data on litigation costs for the years before 2009 wasn't readily available.

He also said several cities included in the Governing study are located in states, like Texas, which impose caps on the amount that can be recovered in tort cases against municipalities.

A 2015 Better Government Association study, focused on how much Cook County suburbs spend on outside legal counsel, showed Evanston ranked 22nd on that list of more than 130 towns, with Evanston's spending on outside counsel averaging about $600,000 a year for the period from 2010 through 2014.

But a city budget memo shows outside counsel charges have grown to average more than $1 million a year for the past two years, largely from the city's efforts to hold local utilities responsible for methane gas and other chemicals found in and near James Park.