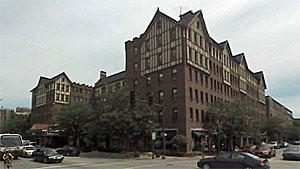 The North Shore Retirement Hotel in downtown Evanston has been sold. And the new owner reportedly plans to keep running it as a retirement community

Irmco has been selling off assets since the death of its founder.

Jeffrey Michael of Horizon told Crain's the company plans to spend about $4 million sprucing up the apartments and common areas of the building, which he described as being "a litle tired."

Studio apartments at the hotel start at $2,000 a month including a meal plan.