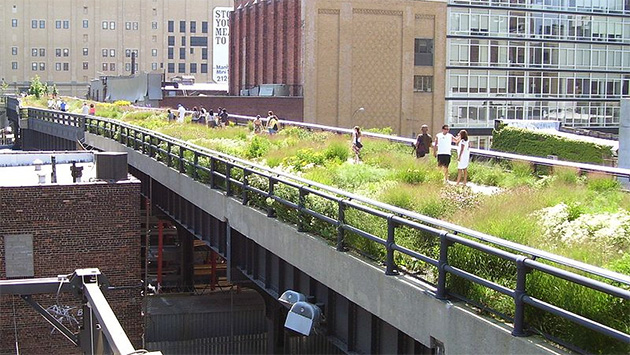 An Evanston version of New York city's High Line Park is one of the redevelopment concepts included in plans for a tax new increment financing district aldermen are scheduled to approve tonight.

There's no assurance that funding for the proposed park — which is envisioned to provide pedestrian and bicycle access to the elevated rail corridor just west of Chicago Avenue — will materialize.

Update 9 a.m. 1/15/13: Aldermen Monday postponed a vote on the Chicago-Main TIF until their Jan 28 meeting after city staff requested additional time to prepare a formal resolution to accompany the implementation plan.

But the proposed elevated park, running from Oakton to Dempster streets between the CTA and Metra tracks, is estimated to cost $19.5 million — nearly 90 percent of the total envisioned funding for open space improvements under the plan.

The other $2 million would go for improvements to the existing St. Paul's Park adjacent to the Main Street CTA station and the Jennifer Morris Park at Washington Street and Custer Avenue.

The draft Redevelopment Implementation Plan for the Chicago-Main TIF also calls for $2.8 million in water and sewer system improvements, $4.3 million in streetscape and roadway improvements and up to $12.5 million in possible taxpayer assistance to a proposed office building project.

The proposed office building, on the southeast corner of the Chicago-Main intersection, is estimated to have a total development cost of between $20 million and $30 million, with the remainder coming from private sources.

The redevelopment plan estimates that it could lead to the location of as many as 300 jobs for office workers at the intersection.

The TIF district proposal calls for spending a total of $25 million on various projects in the district and calls for that spending to be funded by anticipated increases in the taxable value of property within the district.

The implementation plan assumes additional funding from other sources would materialize to carry out the remainder of the projects.

Top: An image of New York City's High Line Park, which was created from an abandoned elevated rail line. (Wikimedia photo by Beyond My Ken.)