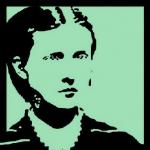 “Well-known for her temperance work, the anniversary seeks to re-introduce Willard as the social justice activist and radical progressive she really was,” the organizers said in announcing their plans.

Saturday, March 8, is International Women’s Day, which the Project has designated as a day of service in honor of Willard.

Participants are asked to volunteer for a few hours or all day at a place of their choice and to record those hours at the Volunteer Evanston website.

Then on March 16, the Frances Willard House Museum at 1740 Chicago Ave. will hold a Community Open House from 1-4 p.m.

The Evanston Women’s History Project is housed at the Evanston History Center in the Charles Gates Dawes House, 225 Greenwood St.

Frances Willard was the first dean of women at Northwestern University and is remembered for her participation in the founding of the Woman’s Christian Temperance Union, which she served as president for 19 years.

Born on Sept. 28, 1839, Willard moved to Evanston at the age of 18 and was noted for her advocacy of a woman’s right to vote, as well as a number of other women's issues.

She died of influenza at the Empire Hotel in New York City at the age of 58. Her home on Chicago Avenue was designated as a national historic landmark in 1965.