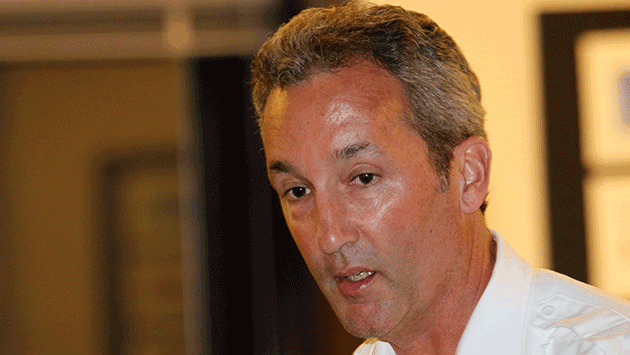 But, after testing several buildings adjacent to the park, Fire Chief Greg Klaiber says no dangerous levels of gas were found in the buildings.

The testing program at the park started earlier this year after city officials learned that similar underground tests at the Metropolitan Water Reclamation District's North Plant site, across the North Shore Channel from Evanston, had turned up high methane levels. 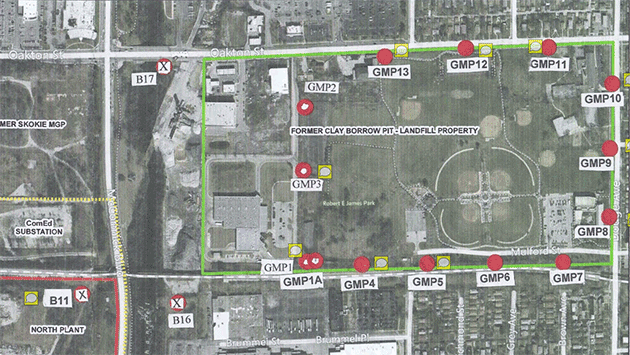 The high methane discovery at the sewer plant occurred at a site (labeled B11 on the map above) at the northwest corner of the Skokie plant — where it is closest to the Evanston park.

The city consultant's testing now has turned up high methane levels — over 90 percent — at five locations around the park (labeled GMP1, GMP4, GMP8, GMP10 and GMP11 on the map).

It found much lower or no gas at seven other test sites around the park, and the consultant was unable to complete tests at two other locations (GMP3 and GMP6).

Klaiber says that, after receiving results of the underground tests, his department conducted tests of methane levels at the senior center and school and at stores in the Howard-Hartrey shopping center south of the park.

Most of those tests, Klaiber said, turned up no sign of methane, although of a series of three tests each at the senior center and school, one at each location showed a 4 percent methane level, which Klaiber said was entirely safe.

The highest readings in the buildings represented only 4 percent of what would be an explosive concentration of the gas, the chief said

The city consultant has recommended further testing to attempt to determine the source of the gas — which it says could be from decaying organic matter at the former landfill or might be gas trapped in bedrock beneath the park millions of years ago.

The consultant also suggests that the city ultimately seek state approval to burn off the gas, either using an internal combustion engine or a gas flare.

City Manager Wally Bobkiewicz had proposed that a public meeting to discuss the reports be held Thursday night at the Levy Center, but agreed to reschedule it for sometime next week after Alderman Ann Rainey, 8th Ward, pointed out conflicts with other meetings that night.

The consultant's initial contract was approved by the City Council in February and the consultant's preliminary report indicates plans for the work had been discussed with city officials as early as last October.