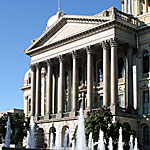 SPRINGFIELD — Illinois taxpayers have been hit up twice this year to cover the cost of extra session days for state lawmakers.

SPRINGFIELD — Illinois taxpayers have been hit up twice this year to cover the cost of extra session days for state lawmakers.

Illinois' 177 lawmakers are paid $111 in per diem expenses and 39-cents per mile for any extra session day, when legislators are called back to the state Capitol after the fall veto session.

There have been three such days this year:

Hahn said Comptroller Judy Baar Topinka has not paid the Senate for that day.

However, per diem and mileage are not the only costs to taxpayers. When lawmakers are in session, there are added costs for state workers, legislative staff members mainly, to come to the Capitol. And the House and Senate add extra security for their respective chambers.

State Rep. Pat Verschoore, D-Milan, said lawmakers needed these additional days to finalize measures that provide tax breaks for Sears Corp. and the CME Group, which runs the Chicago Board of Exchange, as well as individual households.

Verschoore added that taxpayers are getting a better deal by having extra session days, because a full-time, year-round Legislature would be more costly.

"I can't see lawmakers being in Springfield every day," Verschoore said.

But state Rep. Mike Bost, R-Murphysboro, said, "It feels like we're part time in name only. I work every day whether we're in Springfield or not."

State Rep Jack Franks, D-Woodstock, said taxpayers are getting a bargain with a part-time Legislature, even with a few extra days here and there.

"If Illinois was to become full time, you'd have to pay more," Franks said. "Lawmakers would expect higher pay, if this was their only job."

Illinois lawmakers earn a base salary of $67,836 per year.

Lawmakers are not scheduled to return here for session until Jan 31.