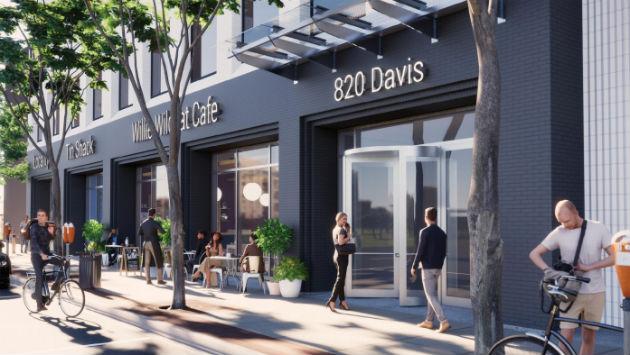 The new owners of the 820 Davis office building downtown will seek approval from Evanston’s Design and Project Review Committee this afternoon for plans to stain the now red-brick building to transform its facade to dark grey and white.

A view of the building’s facade as it looks now.

Free Market Ventures, headed by long-time Chicago developer Jack Buck, in partnership with Blue Vista Capital Management, acquired the building in March from Charles Happ, who had purchased it in 2002 for $6.25 million. County records indicate the new sales price was $10.6 million.

The 77,000-square-foot building was constructed in 1975 and at one time served as the headquarters for the Baird & Warner real estate firm.

The renovation plans also include replacing the storefront windows along the ground-floor facade and the electric baseboard heating system for the storefronts.

They also include erecting a new glass and steel canopy over the buiding entry and a new metal sun shade louver system on the building’s roof.

The Design and Project Review Committee meeting will be held at 2:30 p.m. in Room 2404 at the Civic Center.