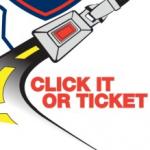 Apparently many drivers fail to buckle-up when they get behind the wheel, based upon results of a recent crackdown by Evanston police.

About three out of four violations issued during the July Fourth Traffic Enforcement effort were for seat belt violations, the department disclosed in a news release.

Here were the results they released Tuesday:

3 Operating a Vehicle with No Valid Driver’s License

4 Operating a Vehicle with No Valid Proof of Insurance

4 Speeding over the Posted Limit

16 Operating a Vehicle with a Handheld Cell Phone

1 Transportation of Open Alcohol in a Vehicle

Law enforcement agencies throughout Illinois participated in this statewide effort to get drunk drivers off the roadways and encourage seat belt use, especially during late-night hours.

Extra emphasis was given to the late-night hours when statistics show the highest number of motorists drink and drive and the fewest buckle up.

The recent law enforcement crackdown was funded by federal traffic safety funds through IDOT’s Division of Traffic Safety and is part of the statewide "Drive Sober or Get Pulled Over and Click It or Ticket" campaigns.