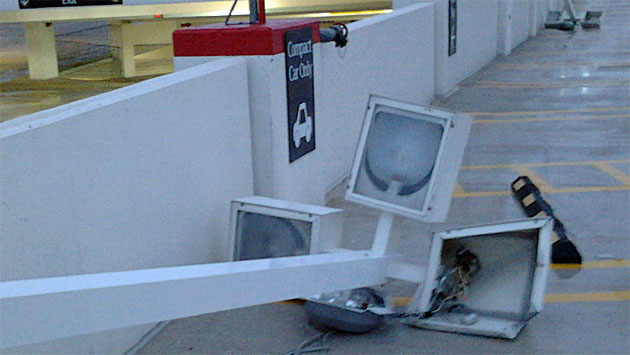 Evanston officials are looking for the cause — and who to blame — after light poles on the top level of the Sherman Plaza garage started toppling in high winds this fall.

At the Transportation and Parking Commmittee meeting Wednesday night, committee members pressed for answers to why the light poles atop the five-year-old structure started failing during a wind storm in late October.

Two poles crashed to the deck surface then, and a city crew found found another pole shaking back and forth in the wind.

Since then the top deck of the 12-story garage has been closed off, and city contractors last week removed the remaining light poles for fear they might fall as well. 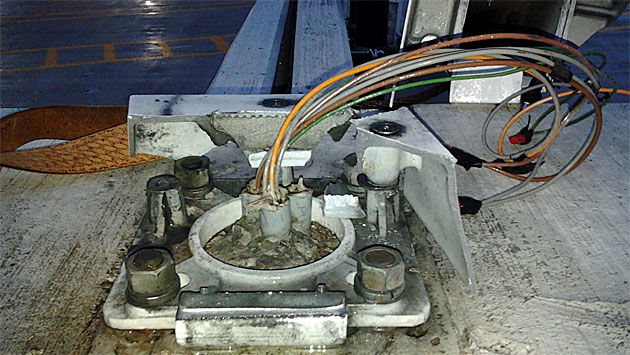 Top: One of the fallen poles. Above: The base of one damaged light pole. (City of Evanston photos.)

Both of the poles that fell were in the center of the deck surface and fell on the unoccupied deck. Had poles on the perimeter toppled, they might have fallen onto the surrounding sidewalks and streets.

Officials theorize that the center poles, which had two or three light fixtures, fell because they were more severely buffeted by the wind than the single-head poles on the perimeter of the garage.

The city is spending nearly $30,000 to have the poles removed, to analyze the possible causes of the failure and to design a new anchoring system for the lights.

Assistant City Manager Marty Lyons said the city's law department is also involved in researching possible liability of companies involved in the original manufacture and installation of the poles.

"One day there were 80 mile-per-hour winds and 20-foot waves on the lake," Alderman Melissa Wynne said, "but that doesn't excuse this."

"This is a classic product liabiloity case, and I'm sure it provides a target-rich environment for the law department to go after."

In addition to the light pole problem, the recently completed deck repair work on the three downtown garages turned up some signs of spalling concrete in the precast concrete facade panels of the Sherman Plaza garage as well as signs of water infiltration in the northeast elevator tower.

Lyons said the city plans to have a consulting engineering firm inspect the garage facade early next year to determine the scope of of needed repairs for those issues.