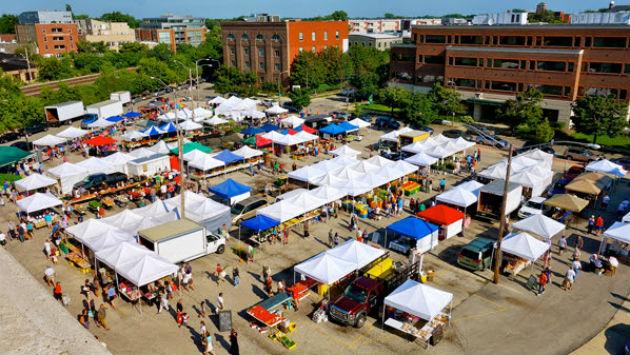 The Farmers Market in a 2019 City of Evanston photo.

The market, which has operated for years from a parking lot adjacent to the Maple Avenue garage, has been run by the city’s Parks and Recreation Department.

Under the proposal discussed at the EDC meeting, control of the program could shift to Downtown Evanston, the non-profit marketing organization that’s funded primarily by a special service area tax on downtown properties.

Downtown Evanston’s executive director, Annie Coakley, told the committee the move could provide opportunities for additional sponsorships and related activities that could generate more revenue for the group’s activities.

The city’s economic development manager, Paul Zalmezak, said it could bring some renewed energy and fresh ideas to the market and could help bring more customers to retailers in the downtown area that continues to face economic challenges.

It also, he suggested, would free up city resources to focus on delivery of other services and could make it possible to further reduce the financial subsidy the city provides to the Downtown Evanston organization.

Alderman Peter Braithwaite, 2nd Ward, said he supported the move, noting that the parking lot used for the market is owned by Northwestern University and is likely to eventually be sold and redeveloped.

Alderman Melissa Wynne, 3rd Ward, said that while having the market next to the garage is handy, the site really is hidden and the market could draw many more people if it were held in Fountain Square.

EDC member Lisa Dziekan said the city should survey the vendors at the market to make sure they would support the change. “My biggest concern would be if somehow it led to a weakening of the number of farmers participating,” she said.

Zalmezak said that assuming the change is approved by the City Council, the market would still probably operate for two more seasons on the existing site. “Nothing is going to happen at a rapid pace,” Zalmezak said, “but if the City Council and community desire the change, we need to start planning for it.”

While no vote was taken on the issue, which was presented to the committee as a discussion item, the sense of the committee was that staff should move forward with planning for the possible change of location for the market.