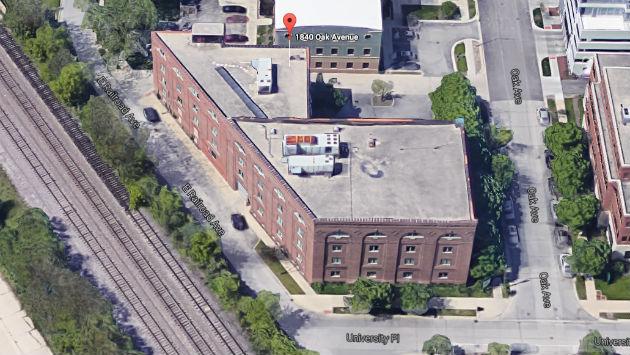 In a memo prepared for tonight’s City Council meeting, Farrar says that while a 1988 agreement regarding development of the Research Park district would have required the city’s approval for the purchase, that provision with regard to the 1840 Oak property was voided by another agreement reached in 2000.

Last month Farrar had asked for additional time to research the issue because of the complex legal history of the Research Park district, after Alderman Judy Fiske, 1st Ward, raised the possibilty that the city might be able to block the sale of the 1840 Oak building to NU. 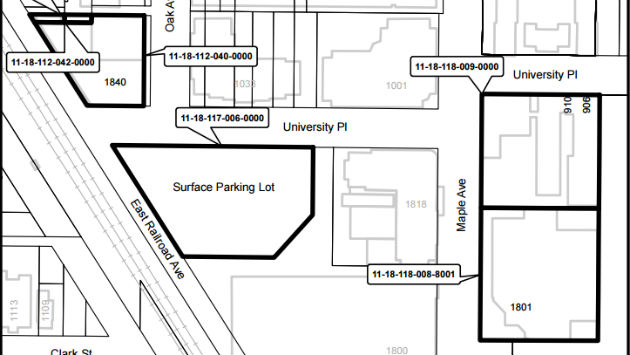 Northwestern University owned properties in Research Park are outlined in black on this map prepared by city staff.

Farrar says the other properties Northwestern owns in Research Park are the surface parking lot on University Place, and buildings at 906-910 University Place and 1801 Maple Ave.

All those properties are tax exempt, but Farrar says the four commercial businesses that least space at 1801 Maple Ave. pay property taxes that totaled $124,421 in 2015.

Farrar says all three of those parcels are still covered by the 1988 agreement and if NU were to sell them to another tax exempt entity, the transfer would be subject to the city’s approval.

Northwestern has agreed to make annual voluntary payments to the city of $350,000 for the city — an amount that is roughly equivalent to the current taxes on the 1840 Oak property plus two other buildings the school also recently acquired, at 630 Clinton Place and 2522 Orrington Ave.

Aldermen tonight are scheduled to adopt a resolution pledging the city to share that contribution with the city’s two school districts in proportion to their share of the overall property tax levy.