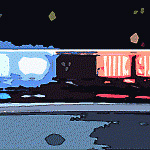 The accident, on the city's border with Skokie, was first reported to Skokie police about 10:20 p.m. They responded to the scene, and Skokie paramedics transported the victim to Evanston Hospital where he was initially reported in critcial condition.

The victim died of his injuries shortly after 8 a.m. today.

Evanston police traffic reconstructionists are continuing to investigate the incident.

Update 4:25 p.m. 9/5/12: Police now say the driver of the car, a 77-year-old Evanston man, has been issued  traffic citations for failure to reduce speed to avoid an accident and failure to yield to a pedestrian.