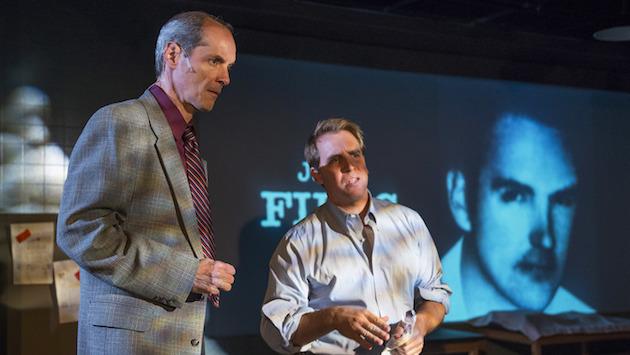 The successful Chicago production of “Assassination Theater,” an evidence-inspired recounting of the Chicago mob's involvement in the JFK assassination, sports an Evanston actor and more than a few surprises for the audience member.

The anniversary of the JFK assassination just passed on Nov. 22, and for the occasion, actor Mark Ulrich and real life character-and-FBI-agent Zack Shelton paired up for a panel discussion after the show.

“I was involved with the two initial readings of the play at 16th Street Theater and the Hemingway Museum,” said Ulrich in an interview with Evanston Now. “Zack was in attendance at those readings. The script was new, so we had a lot of questions ready, and what a great resource Zack was. Playing someone like Zack…you feel an extra responsibility trying to get it right. I don’t feel cut from that cloth, so it takes some work on my part.”

“Mark and I got to talk a bit and we got into some of the things in the play that speak a bit more strongly,” said retired FBI agent Shelton. “He does an excellent job. Doesn’t have the New Orleans accent…!” he laughed.

Zack Shelton was in the FBI for 28 years. Much of that time was spent between Chicago and Texas, where he eventually retired and took up private investigation. “It’s mentioned in the play: James Files, a subject of mine in 1980,” said Shelton. “He was an associate of a big mobster in Chicago, selling tractor-trailer loads of goods in Melrose Park, where you had to be in the mob.”

“I gave the information of Files to a private investigator…got together with a producer in California when I retired, and I interviewed Files from there, and the rest is history.” That history is the subject of “Assassination Theater: Chicago's Role in the Crime of the Century,” which reinforces Shelton’s claim that the Chicago mob was responsible for the death of John F. Kennedy.

“I went to Joliet prison and we, Files and I, talked about the case, back in 1980. Basically I threw some names at him, and we talked, he was very pleasant to me, it wasn’t like cop and bad guy, it was like a real personable conversation. He went into how he went down to Dallas, sent there by Nicoletti [mobster], what his role was, and I…he looked me in the eye…” Shelton drifted off.

“I was 50/50 when I left the room; I had more to prove up his story than to disprove the story. Was he there that day? Definitely. Did he take that shot? I’m not 100 percent sure. In my dealings with crooks, they do embellish a lot of their role, and you’ve gotta get through all that…Take what they say with a grain of salt. You get to the point where, why would he say he did it when he didn’t do it?”

Shelton’s further investigation did more to shore up the story than to debunk it. “I talked to a lot of mob people, CIA/FBI agents, and came up with the story,” he said. Then Hillel Levin, the playwright, contacted Shelton about the investigation, they talked about JFK, and Levin began his own research to write the play now staged at the Museum of Broadcast Communications.

“The more I thought about it, the more I liked it, because of what it is- the Museum of Broadcasting,” said Shelton. “Of any place to have it, it’s turned out to be great. In the museum are all of these great people and it fits right in with the tone of the play.”

“We animate all of the characters, but we use their own words,” said Ulrich, when asked about dramatization in the play. “If you hear those guys speaking, it’s what they said. Hillel and Zack [also characters in the play] have opinions, but the others, it’s all what they said.”

“What’s different about this play is, we know what the Warren commission said, what the accepted narrative was in the 60’s, and why it had to be that way, because of the Cold War, Cuban Missile Crisis, the power void that the death of a president creates,” said Ulrich. “There were tremendous pressures that demanded a quick resolution, quick answers, and a quick restoration of power and leadership, and the quelling of anxieties. So we can understand why the Oswald story was necessary."

"But we don’t have those same anxieties, pressures, today. I feel it’s important for us to look at this event knowing that, with fresh eyes, and say ‘we don’t have to accept those things we were told.’ When our children ask us what happened, when we talk about this, what is it we want to say, and what do we know?”

Ulrich believes the play is the perfect conduit for this discussion. “Every American has a responsibility to own our history. In the play, we present a lot of material and it’s in your lap.”

And in terms of Chicago’s blame in the assassination? “We definitely make the case for the mob doing it, but [the play is] even stronger than that because it allows, demands, that the audience be participants,” said Ulrich. The “investigative journalism” style of the play is strongly suited for convincing the audience of a unique perspective, but, being a play, it also leaves room for interpretation.

“People of my age group grew up with this,” said Ulrich. “For me, I don’t remember the event, but I grew up right after it and it was very much- it permeated our awareness of politics and the potential for tragedy. So my connection, and I think everyone who sees the show- has a personal connection with the story even if it's very thin.”

“All my life I’ve never really bought the traditional explanation. While it’s possible, it’s highly improbable,” said Ulrich. “That’s what this play does – Hillel is of my generation, Zack, Hillel, we grew up with the story. I think we all thought there was something fishy about it. I never thought we’d have any satisfying explanation for it. This play attempts to not just add to the noise, when it comes to conspiracy, but to clarify.”

Shelton disagrees somewhat with the interpretation of the play by Levin. “There’s so much to this, I’ve told everybody, it’s a big jigsaw puzzle. If you get a few pieces, it doesn’t mean anything. But if you start putting it together, it starts to make a big picture. To put all that into a two-hour performance, you just can’t do it. There’s so much that I have that’s not in the play."

"In the play, him and I argue- he thinks it was totally the mob, I disagree with him, I think there had to be some government involvement. He doesn’t get into that, he thinks he does, but I disagree with him. But the way he presents it, I don’t think America could accept the fact that our government killed our president, but that the mob did and the government covered it up. I think America can accept that. Of any time in America since that time, today is the time America can accept that truth.”

Shelton skirted around some of the juicier tidbits of the case, leaving it for others to decide for themselves after seeing the play. “There’s a possibility here in the next coupla years that [Files] could get out of jail. There’s some stuff he says he has that may corroborate his story, which I tell him he needs to get to me. There’s one thing he says he has that would prove it; the whole world would believe him then.”

“Assassination Theater: Chicago’s Role in the Crime of the Century” runs through Jan. 31 at the Museum of Broadcast Communications in downtown Chicago. Tickets are available online or by calling 800-838-3006.