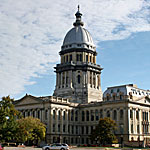 SPRINGFIELD —The federal government is trying to crack down on abuse of food stamp benefits, as the cost of the nationwide program continues to climb toward record heights.

SPRINGFIELD —The federal government is trying to crack down on abuse of food stamp benefits, as the cost of the nationwide program continues to climb toward record heights.

The U.S. Department of Agriculture announced new rules Tuesday intended to curtail the illegal practice by food stamp recipients of using the Internet to trade their government aid for cash.

Food stamps must be used by their recipients according to the specific parameters set out by the federal government. Selling one's benefits to another person for cash is specifically prohibited.

There were 1,715 cases of fraud in Illinois in fiscal 2011, said Januari Smith, spokeswoman for the Illinois Department of Human Services, which administers the food stamp program in Illinois.

Food stamps, known in Illinois as LINK Cards, are a joint federal-state program that provides low-income households with credits to buy food.

To circumvent the law, some people have used social media to set up deals to illegally sell their benefits.

An Illinois Statehouse News search of Twitter posts using the words "food, stamps, sell" turns up results like "This is illegal but I needa sell my food lmao…. wanna buy?" and "Found someone to sell me some food stamps."

States were unsure whether they could act if someone simply posted on Twitter his intent to sell his food stamps or if officials had to wait until the actual sale took place.

USDA's new rules said someone saying online that he wants to sell his benefits is punishable in the same way as someone who actually sells his benefits.

Depending on the amount of money involved, punishment of those who commit food stamp fraud ranges from no longer receiving aid to being convicted of a felony and serving a prison sentence.

Fraud of less than $150, which is more than the worth of the average monthly LINK card, is a misdemeanor and can result in up to a year in jail for the seller and buyer.

"This (Obama) administration is committed to meeting the highest standards when it comes to protecting taxpayer dollars and enhancing the integrity of the program to ensure those dollars are invested wisely so the American people can have confidence in overall program performance," Kevin Concannon, the undersecretary for Food, Nutrition and Consumer Services division of the USDA, said in a written statement.

Nationally, for every $100 of food stamp assistance provided, about $1 is spent fraudulently, according to the USDA.

The percentage of fraud happening online is unknown. The Milwaukee Journal Sentinel reported finding about 70 posts on Facebook nationwide either selling or asking to buy food stamps.

Smith of DHS said all forms of fraud receive the equal attention from the department.

Repeated calls to the USDA were not returned.

Other changes the USDA announced Tuesday include:

Allowing states to take stronger action against those that request an excessive amount of replacement benefit cards;

"To keep up with the latest trafficking strategies, we're using state-of-the-art technology to identify new threats," Concannon said. "We're continuing to enhance the effectiveness of our data mining and analysis strategies."

The USDA's announcement comes at the same time as the number of people receiving food stamps nationwide hits more than 46 million people, a record high. In Illinois the number of participants has increased from 1.3 million in fiscal 2008 to 1.7 million in fiscal 2010, according to the Kaiser Family Foundation, a nonprofit focusing on the major health-care issues facing the United States.

The cost of the program also has increased. Food stamp recipients in Illinois received $2.8 billion in benefits in fiscal 2010 compared with $1.7 billion in fiscal 2008, according to the Kaiser Family Foundation.

Lawmakers in Illinois tried passing a law last spring that would require photo IDs on LINK Cards. The legislation was watered down to only a study of the costs of adding the identification requirement, which stalled in the Illinois Senate.