Evanston aldermen are scheduled to vote Monday on a contract to install 15 outdoor surveillance cameras in downtown Evanston and in high-crime areas on the city's south and west sides.

Evanston aldermen are scheduled to vote Monday on a contract to install 15 outdoor surveillance cameras in downtown Evanston and in high-crime areas on the city's south and west sides.

The $341,000 project is fully funded by a pair of federal grants the city received last year.

Nine cameras would be located at major downtown intersections

Three would be placed on the west side, two along Dodge Avenue north of Church Street and the third at the intersection of Foster Street and Jackson Avenue.

The final three would be added on the south end of town, two along Howard Street east of Ridge Avenue and the third at the intersection of Brummel Street and Custer Avenue.

The cameras would be linked to police headquarters using the city's existing fiber optic network and a wireless network linking two city water towers with the Skyline apartment building on Howard.

City staff is recommending that the contract be awarded to Current Technologies of Downers Grove.

Police Chief Richard Eddington said the new cameras would be smaller an "less aesthetically offensive" than the boxy camera systems with blue lights on top now used at a few locations on the city's west and south sides. 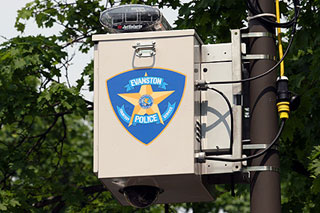 The chief said the cameras are an effective tool for obtaining evidence or wrongdoing.

"There's almost an expectation now by the judge, jury and prosecutor that we'll have some kind of digitally recorded evidence in any prosecution," he added.

The city's police cars and even police motorcycles now are equipped with cameras.

He said that, given the limits of the older technology, the existing cameras have been reasonably effective, saying there was a double-digit drop in criminal incidents the first summer after a camera was installed near Brummel Park.

Eddington said the cameras can't eliminate the need for police officers on the beat, but that they help increase the effectiveness of officers in dealing with crime problems in a time of scarce budget resources.

"The cameras don't go on vacation or have sick days," the chief said, "and while they do break once in a while, the cost of maintaining them is significantly lower than personnel costs."

Police use of surveillance cameras has given rise to privacy concerns over the years, but Eddington said Evanston "isn't on the cutting edge of social change in this matter."

He said Chicago and other major cities have used similar systems for years, and such systems have become nationally and internationally accepted as a means of enhancing personal safety and security.

Asked whether he'd be willing to make the live feed of camera images available online to the public — after the fashion of web cams used to show traffic and weather conditions — he said he hadn't considered that option before.

"On a discussion basis, I'd have no opposition to it," he said, "but I'd have to touch base with the legal department to review any possible legal concerns."