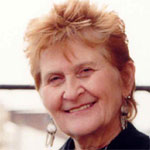 “A Conversation With Alice Stuart” and concert will be held from 3 to 5 p.m. Friday, May 25, in the Forum Room on the second floor of the south tower of Northwestern University Library, 1970 Campus Drive. The event is free and open to the public.

Stuart's career began in the early 1960s. She performed at the Berkeley Folk Music Festival and toured with folk and blues legends such as Joan Baez, Doc Watson, Mississippi John Hurt, Lightnin’ Hopkins, Albert King and many others. In 1966, Stuart teamed up with Frank Zappa during the formation of Mothers of Invention and then moved on to form Alice Stuart and Snake.

Stuart wrote her own music, fronted a male band and played lead guitar on national and international circuits all through the 1970s. She toured the United States and Europe with Van Morrison, Commander Cody, Michael Bloomfield and John Prine. She appeared and recorded with Jerry Garcia, John Hammond, Richard Greene, Elvin Bishop, Dave Mason, Sonny Terry, Tower of Power, and other artists.

After a long hiatus devoted to raising her family, Stuart resumed her recording and touring career in 1996, focusing especially on electric blues and receiving Grammy Award and Handy Award nominations for recent recordings.

“I am thrilled to have Alice visit us,” said Northwestern’s Kramer, principal investigator for “The Berkeley Folk Music Festival Project and the Digital Study of Vernacular Music,” which is a digital humanities project that brings together the 30,000-object archival collection of the Berkeley Folk Music Festival (1959-1970) with new digital technologies and tools of annotation and arrangement to enable collaborative study of vernacular musical expression and history. “She is a marvelous, underappreciated participant in the folk revival and remains strikingly unrecognized despite the recent interest in female rock and rollers,” he said.