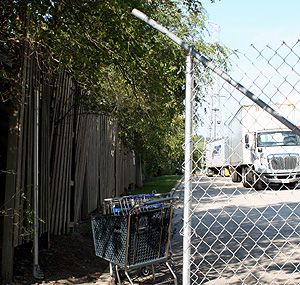 Neighbors of the Sam’s Club in Evanston split in their views about the store’s back fence Thursday night.

Some complained that a gap in the fence at Pitner Avenue and Cleveland Street lets customers roll shopping carts out of the parking lot, which they then abandon around the neighborhood.

The store reportedly recently repaired the fence after complaints about the wandering carts, but someone has since created a new big gap in it.

Other neighbors said the opening should stay. Having the fence creates a major inconvenience for them, they said, forcing them to walk six extra blocks or more around the entire fenced-in shopping center to get to the store.

Alderman Lionel Jean-Baptiste, 2nd Ward, who called the neighborhood meeting at the Robert Crown Center, said he’d check with city staff about what plans for the center require in the way of fencing and landscaping and would try to persuade the store’s management to be more vigilant about retrieving the wandering carts.

Neighbors at the meeting also complained about auto repair shops in the area that allegedly illegally store cars on residential streets and do work late at night.

Jean-Baptiste said city staff have told him that because the repair shops are on land that’s zoned for industry, there are no restrictions on their hours of operation, other than that they’re not supposed to operate between midnight and 6 a.m. without city approval. He said he’d try to negotiate with the businesses to work out a reasonable compromise.