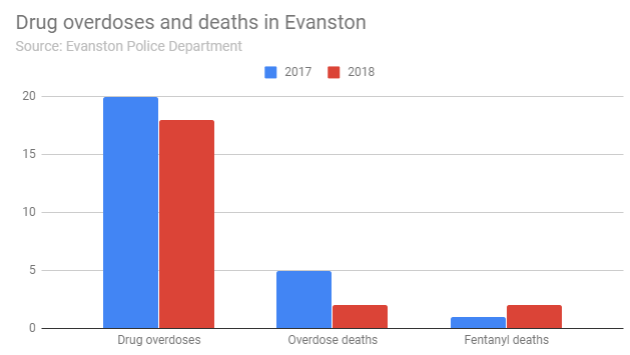 Drug overdose deaths declined in Evanston this year, but fentanyl, the synthetic opiod that’s surged to be the leading cause of overdose deaths nationwide, figured in both of the deaths reported here.

The latest national statistics, released last week by the Centers for Disease Control, based on compilations of death certificate records, indicate that fentanyl became the leading cause of overdose deaths in 2016, exceeding heroin for the first time.

Based on the national figures, a city the size of Evanston would be projected to have had about 14 drug overdose deaths in 2016 with 4 or 5 of those caused by fentanyl.

An image from the Drug Enforcement Administration showing, in relation to a penny, the size of a fentanyl dose considered likely to be fatal.

Fentanyl has acquired its deadly reputation in part because its typically 80 to 100 times stronger than morphine, meaning it’s far easier for a slight miscalculation of dosage to lead to death.

The CDC says that drug overdose death rates in Illinois and Wisconsin are near the national average, and are lower than average in Iowa, but several nearby states, including Indiana, Michigan, Missouri and Ohio, have rates significantly higher than average.