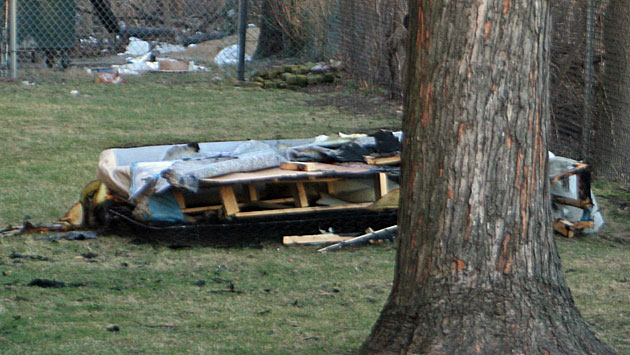 Residents of two apartments in a building at 1220 Harvard Terrace were forced from their homes this afternoon by a fire that started with an electrical short.

Evanston Fire Chief Greg Klaiber says the fire began in an outlet behind a bed in a third floor apartment and spread to the mattress.

Klaiber says four fire engines, a truck, an ambulance and a battalion chief's car were called to respond to the blaze, which was reported about 2:45 p.m.

Klaiber said the residents of the two damaged apartments may be able to stay temporarily with friends, and that if not, the Red Cross would assist them in finding temporary housing.

No one was injured in the blaze, and fire units were able to start packing up within about 30 minutes.

Top: The burned mattress ended up in the yard behind the building after the fire was put out.