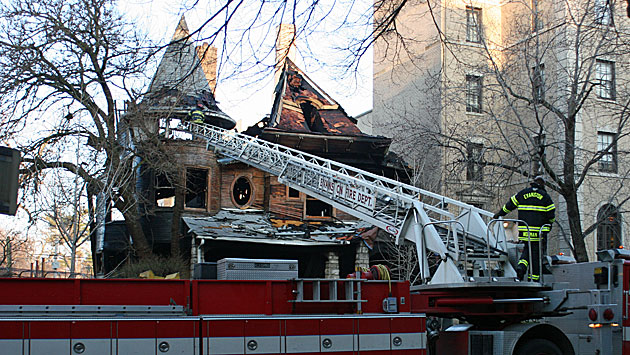 Evanston's Fire Department had its second busiest year ever in 2011, and the city suffered its biggest dollar value in fire losses in 16 years.

Evanston's Fire Department had its second busiest year ever in 2011, and the city suffered its biggest dollar value in fire losses in 16 years.

The department's annual report, issued today, shows that the city's 110 firefighters responded to 3,696 fire calls and made 5,467 ambulance runs last year. That total was only exceeded in 2008, when the total of fire and ambulance calls was 9,134.

The trendline has gradually been heading upward for the past quarter century, with ambulance runs generally increasing faster than fire calls.

The worst of the year's 157 fires struck late in the evening of March 15, when the former Catholic Woman's Club building at 1560 Oak Ave., undergoing renovation to turn it into a clock museum, was destroyed in a spectacular blaze.

Fire officials say investigators for the building owner's insurance company eventually determined that the fire was caused by sparks from cutting torches and smoldering construction materials.

The estimated $1.6 million in damage from that fire was the big factor in pushing fire losses for the full year to nearly $3.3 million, roughly twice the average for recent years, and the largest since a lost of $6.6 million in 1996.

No one died in a fire in Evanston last year. There've been only two fire deaths in the city in the past decade.

Fire Chief Greg Klaiber noted in the report that the city placed a new aerial ladder truck in service last year, replacing one that was 21 years old.

And the department ordered a new ambulance, thanks to a gift from Northwestern University, which is expected to go into service this spring.