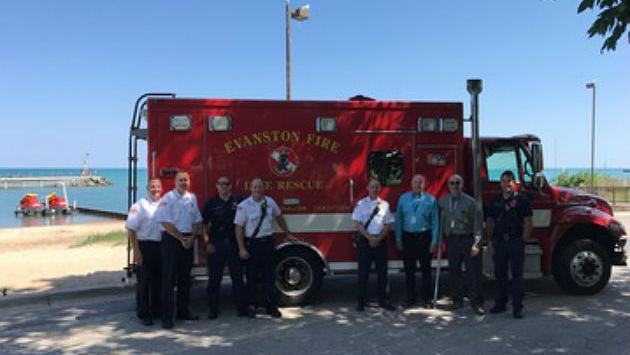 The Evanston Fire Department has added another vehicle to its fleet — a refurbished ambulance that’s now being used as an equipment van for the dive rescue team.

The conversion of the old Evanston ambulance was funded by the Foreign Fire Tax Board, at an estimated cost of $20,000.

“The goal was to design and build a vehicle, which would give divers the ability to get in the water faster and more efficiently. We accomplished our goal by using an old ambulance, which gives us a larger amount of space within the rear compartment and allows each of the nine divers to have their equipment in a constant state of readiness. When it comes to water emergencies, time is critical, and every second counts,” said Fire Captain David Smrha.

But as the amount of equipment for each team has increased over the years, that left the dive team without enough room to store its gear a way that it could be most quickly accessed in an emergency.

Scott says the dive team responded to a total of eight incidents in 2015..