Division Fire Chief Kevin C. Kelly will retire Friday after 30 years of service with the City of Evanston. 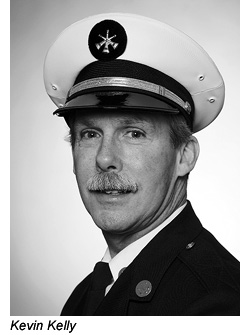 Community members are invited to attend his retirement party scheduled for 1:30 p.m. at the Fire Department Administration Building, 909 Lake St.

Chief Kelly was hired on March 13, 1978, as a firefighter.  In 1981, he became a firefighter/paramedic and worked out of Fire Station #1, then at 909 Lake St., until 1990 when he was transferred to the Fire Prevention Bureau and became a fire inspector/investigator.

In the bureau he obtained his fire inspector certification as well as his fire investigator certifications. During this time, he earned his bachelor’s degree from Southern Illinois University.  In 1996, he was promoted to captain and in 2004 to Division Chief of Fire Prevention where he served as the city’s fire marshal.

During his tour in the bureau, Kelly was involved in the transformation of the Evanston’s downtown area, condominium developments, the expansion of Evanston Hospital, Ryan Field and many other major projects including First Night and 14 Fourth of July Celebrations.  His talent as a fire investigator resulted in several convictions over the years.  Kelly is a long-time Evanston resident.